With Bo Xilai disgraced just weeks before the 18th Party Congress decides China’s leadership for the next 10 years, government officials may be under unusually high pressure to keep a low profile. The Chinese blog AmazeNews posted a screenshot of this text message on September 30: 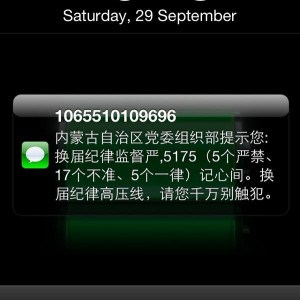 Saturday, 29 September: Briefing from the Inner Mongolia Autonomous Region Party Committee Organization Department: Disciplinary supervision during the leadership transition is strict. Take 5175 (the 5 strictly-prohibiteds, 17 forbiddens and 5 without-exceptions) to heart. Discipline during the transition is like a high-voltage cable. Please do not under any circumstances commit a violation.

The “5175” protocol is no secret. The following is translated from the Ningxia Health Department website [zh]. Published on July 6, 2012, this document refers to a number of democratic procedures in which Party officials participate:

Beginning in 2011, the four levels of Party committees in every province (including autonomous regions and direct-controlled municipalities), municipality (including prefectures), county (including cities, districts and banners) and town will undergo leadership transition. Elections to the People’s Congress, government and People’s Political Consultative Conference will also occur in succession. This is a monumental event in the political life of the Party and the country. To enforce discipline during the leadership transition, the Central Commission for Discipline Inspection and the Organization Department put forward these “Five Strictly-Prohibiteds, 17 Forbiddens and Five Without-Exceptions.” Party cadres must strictly observe these rules.

4. Employing people in a manner that goes against regulations.

5. Interfering with the leadership transition.
The Seventeen Forbiddens:

3. Participating in or helping others to canvass and engage in election bribery. These two practices directly violate democratic regulations and seriously influence the impartiality of elections.

4. Bribing in pursuit of promotion or better pay and benefits.

5. Accepting bribes in order to use the advantages of one’s office to pursue promotion or similar demands for others.

6. Relying on connections, back door channels, coercion or similar improper means in pursuit of promotion or better pay and benefits.

7. Promising favors or interceding on behalf of others to facilitate their promotion or transfer.

8. Selecting cadres for special appointment in violation of regulatory procedure.

10. Practicing favoritism in appointing people or appoint candidates for promotion or reassignment.

11. Providing leading cadre positions in excess of the regulated maximum or raising cadre’s salary and providing benefits in violation of regulation.

12. Using the advantages of one’s office to illicitly interfere with appointments at lower levels or in previous locales or offices of one’s own employment.

14. Using intimidation or deception to jeopardize representatives’ ability to exercise their rights to vote for elected officials, be elected and vote at the People’s Congress.

15. Fabricating or spreading rumors which frame or humiliate and slander others.

17. Obstructing the investigation or processing of disciplinary issues concerning the leadership transition.

1. In the case of vote solicitation or election bribery, eliminate and inspect the candidate in violation of regulation.

2. In the case of the buying and selling of official titles, suspend or remove the person in question from office in advance [of investigation].

3. In the case of taking public office through illicit means, do not promote the person in question.

4. In the case of giving cadres assignments in violation of regulations, nullify their appointments and carry out serious investigations of the concerned persons.

5. In the case of interfering with or violating the work of the leadership transition, investigate and prosecute those involved. Send those suspected of involvement to judicial offices for processing.

Read more about the upcoming leadership transition from CDT.

Democratic recommendation (民主推荐) is a procedure for the nomination and selection of cadres to higher positions. Back.

Democratic deliberation and review (民主测评) is a form of group evaluation of an individual cadre’s abilities and performance. Back.

Officials will vote for the next group of national leaders at the 18th Party Congress. Back.

Translation: “If I Don’t Speak, I’ll Spend My Life in Shame”