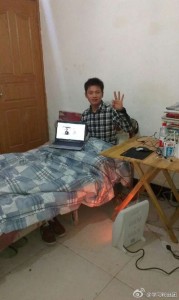 Zhang Hongming, the man behind the Learn from Xi Fan Club.

Does incoming President Xi Jinping have a stalker? After months of anonymous posts, the blogger behind the “Learn from Xi Fan Club” Weibo account (@学习粉丝团) revealed himself in an interview with the Associated Press earlier today. Followed by over 825,000 people, the account is filled with photos of Xi traveling the country. Zhang Hongming, a migrant worker from Sichuan Province, told the AP he wanted to end speculation about his identity. He even posted a photo of himself on Weibo, tucked under the covers to fight the cold. Zhang left this final message to his readers:

@xuexifensituan: Farewell. I came with joy, I leave in sorrow. Tears are all I can give, torment is all I can keep. Despite my suffering, I must persevere a while longer. Thank you to all my disciples and fans. Perhaps our countrymen aren’t ready for us. I am full of self-reproach and regret. If you share my interests, send me a private message: 605789327 I’m at: http://t.cn/zjt8hzC (February 11 15:27)

@laochen: No matter what, the masses will still believe you are from [Xi’s] office…  Why don’t you just admit it 🙂

Other netizens were less delicate:

@xuhan-Han: Aren’t you one person? How did you become “us”?

The Learn from Xi Fan Club has accounts on multiple microblogging platforms. This photo appeared on Sohu Weibo.

@tengjunyouyou: Don’t you sneak out without answering these questions: 1. How did you get to know the travel schedule of the national leader? 2. Where did you get these close-ups?

@thistle2012: A thousand words, a million places, and one guy for hire–how could you get all those close-ups?

@internetlaughs: Get out of my face! Where did all those close-ups come from? How can such a loser have so many different cell phones? Or are you switching cell phones constantly to post?

Zhang’s cellphone showed that he posted his last message from Wuxi, Jiangsu Province, but one netizen noticed something fishy about his location:

@dongzhenwuxin: Why is your private messenger number from Hong Kong?

@bluemtnBaiSuzhen: You can’t cook up any more lies? You fix it by walking away?

@boxind: I seriously doubt your identity…

@qiuzhiyunei: Cool it with the dramatics. Hey twerp, let me ask you, there’s this netizen who just wrote a measly little weibo. Why did she get picked up by the police?

This may be a reference to Cheng Aihua, who was detained by the police on February 8 after posting on the Tencent Weibo Learn from Xi Fan Club account, as reported by Yaxue Cao at Seeing Red in China. Cheng has since been released.

@renliantao: Go then. This was nothing but a farce.

@xiaxiaoxxx: I’ll believe you when I see you on News Simulcast.