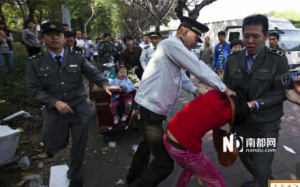 A woman selling fruit on the street was roughed up by chengguan as her toddler looked on.

Guangdong Propaganda Department: On March 6, a conflict arose with a female peddler while Chigang Road, Haizhu District [Guangzhou] chengguan law enforcement officers on Guangzhou Avenue. The relevant departments in Haizhu are already in the process of investigating and handling the matter. The media are asked to report according to information issued by the relevant departments in Haizhu and to downplay the story. Do not put it on the front page or lure readers to it. (March 7, 2013)

Photos from the standoff, during which the woman was manhandled in front of her toddler, have widely circulated on Weibo. China Media Project has more on the story.