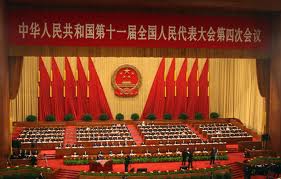 Central Propaganda Department: Matters Needing Attention During the Two Sessions: (1) Without exception, do not report on officials’ financial disclosure during the Two Sessions; do not comment; do not republish reports from foreign media. (2) During the Two Sessions, coverage of sudden incidents or mass incidents in Shaanxi Province must go through the Propaganda Department and then listen to planned reports. (3) For the time being, regional media must cease monitoring public opinion outside the borders of their jurisdiction. (4) Without exception, all information on the issue of anti-corruption which has not been verified by the discipline inspection commissions of your respective jurisdiction must not be reported. (5) Reduce the number of negative articles on home pages. The Internet Information Office [probably of the State Council Information Office] requests timely management of this task. Particularly ensure that social networking sites are taken care of. (6) Media personnel must not post information which is harmful to the government on their Weibo accounts. All weibos posted by media organizations, reporters, and editors must represent their respective work units. (7) Report less on interaction among the leadership. Do not report “shocking” news on representatives. Do not turn reporting on the Two Sessions into entertainment. Report more on the voices of grassroots representatives and committee members. (8) Reuse reports from authoritative media sources and complete coordinated reports [with these sources]. (9) Reports on learning from Lei Feng must not veer off course or have a negative influence. (10)  Coverage of congress amenities and work style and the Clean Plate Campaign must focus on new accomplishments, but rein in the scope [or reporting]. (March 3, 2013)