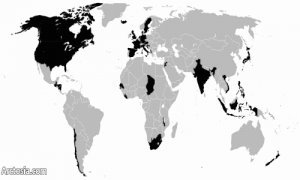 Map of countries which have “hurt the Chinese people’s feelings.” (Arctosia)

In 2008, blogger FangK searched through the electronic archives of the People’s Daily between 1946 and 2006 and discovered that 19 countries and organizations had been accused of hurting the feelings of the Chinese people in its pages. Danwei later translated FangK’s study. Victor Mair considered the inverse at Language Log in 2011, comparing the frequency of hurt Chinese feelings to those of Russians, Japanese, Jews, and other national and ethnic groups.

The very notion of an entire country’s people having their “feelings” collectively “hurt” is inherently idiotic. On one hand, there’s the idiocy of the government proactively claiming such on behalf of all the Chinese without actually consulting them. On the other hand, there’s the simple idiocy of “you hurt my feelings” being mistaken for a mature, rational response to any disagreement or criticism.