The story below is translated from a Yanzhao Metropolis Daily report. It is currently unavailable on the newspaper’s website.

Lawyer Pu Zhiqiang Says He Is a “Key Person,” Refused Admittance to Hotel 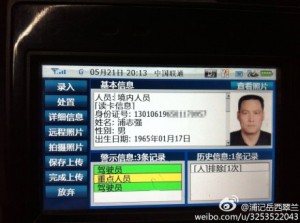 Pu Zhiqiang’s identification information as it appeared on a terminal at the Rui’an Hotel in Beijing. (Pu Zhiqiang/Weibo)

Last night, prominent lawyer Pu Zhiqiang posted on Weibo about a “rather shocking” event–he has been classified as a “key person” and barred entrance to a hotel in Beijing. The hotel states that it is simply following procedures for verifying the information on guests’ identification cards.

“I have just learned that, as a key person, I can’t enter this hotel. It feels very strange to know I’ve been labelled like this.” At 9 p.m. last night, Mr. Pu wrote a weibo saying that he had been going to the Rui’an Hotel on Zhengyi Road, Beijing to see a friend visiting from out of town. His friend had also brought tea for Mr. Pu. What is unusual is that Mr. Pu was stopped by public security at the door, where they checked his identification card.

Mr. Pu revealed that he gave his card to the security guards, who swiped it at a terminal to check his information. They told him that he is a “key person” and that he would be refused entrance to the hotel. 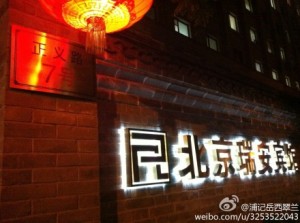 Mr. Pu took a photo of the information about him  displayed on the terminal screen, explaining that he is not a petitioner. The security guards were courteous, saying they understood he had not come to petition, but Mr. Pu was still unable to go inside. There was no dispute between the two sides. Mr. Pu called his friend, who came outside to give him the tea.

Mr. Pu says that he has checked into hotels across the country and has never encountered this situation before. The reception manager at Rui’an stated last night that their “hotel is rather special,” as they do not receive foreigners or anyone with a criminal record. If someone’s identification card indicates that he is a key person, the staff can only decide whether or not to admit him based on the information available.