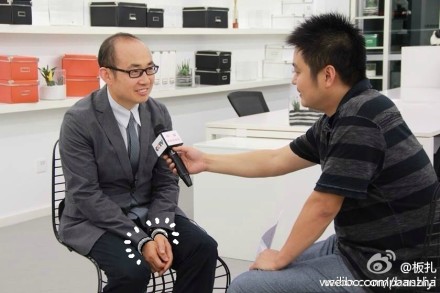 So much for speaking out. (Banzha/Weibo)

Chinese real estate mogul and popular Weibo personality Pan Shiyi has not been afraid to speak out on social media. He is a “Big V” with millions of followers. His online activism helped to pressure the Beijing municipal government to report more accurate air pollution readings. Pan has laughed with netizens even as they laughed at him, taking his punches with grace. But the confident, outspoken Pan disappeared on Wednesday evening when he appeared on CCTV to discuss new regulations of the dissemination of false information online.

Pan Shiyi: Last night, I called a friend, another Big V, and told him, “CCTV is going to interview me about the law. I’m nervous. What should I say?” He said, “Don’t accept the interview.” I said, “Too late. They are 20 meters away and walking towards me.” “Then you just say shame on rumors and slander.”

Netizens could now face up to three years in prison if the “false information” they post is reposted over 500 times. Meanwhile, Big Vs are being targeted by the authorities. Chinese-American business and Big V Charles Xue was arrested in August. Tycoon and civil rights activist Wang Gongquan, whose Weibo account was deleted long ago but who remains active on WeChat, has now been detained.

On Weibo, some netizens have mocked Pan for his stuttering and flubs on TV:

周泽律师: Pan Shiyi has over 16 million followers on Weibo. I suggest we nationalize and tax his account and change its name to The People’s Weibo.

Others have been more understanding of Pan’s predicament:

舒可心: Apparently, Mr. Pan was being interviewed by the police, not a reporter!

Facing the ever more powerful People’s Democratic Dictatorship, all the little crawling bugs can only shake in fear, even if that little bug is a Big V.

shumic: He doesn’t even need to cut his hair. He only needs a yellow [prison] vest.

运床专家: After watching Pan Shiyi’s CCTV interview, I sighed. Mr. Pan was so nervous in front of that air-brained host that he couldn’t put a sentence together and had to force himself to stay calm. It’s only because the Party and the government were behind the microphone. It seems like no one will be spared this round of disciplining the Big Vs. It’s almost like the Anti-Rightist Campaign. 60 years of Qin rule, and no respite for 8,000 miles.

The Qin Dynasty was the first to unite the Chinese heartland and organized the construction of the first iteration of the Great Wall. The Qin Emperor is also remembered for burning books and executing scholars.

何三畏: The People’s Daily has never lied in the last 60 years–please repost it 500 times. Thanks.

Via CDT Chinese. Translation by Junebug.