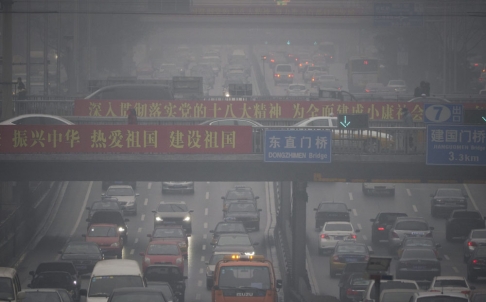 Following the announcement of a new five-year clean air action plan earlier this month, Beijing’s environmental bureau has stressed that its ability to meet targets depends on its neighbors’ performance. 25% of the capital’s air pollution originates in neighboring regions. From Li Jing at South China Morning Post:

“The central government has also given objectives to nearby provinces and cities – including Hebei , Inner Mongolia, Shandong , Shanxi and Tianjin – so if they can take care of their own problems, Beijing will be fine with the 2017 target,” [spokesman Fang] Li said.

[…] The finding highlights the challenge Beijing faces in tackling the problem – neighbouring areas fear any bold measures will stifle their economic growth.

[…] An analysis by Greenpeace found that existing coal reduction plans in the Beijing-Tianjin- Hebei areas were insufficient for the capital city to meet its target reduction. The three areas aim to cut coal consumption by 63 million tonnes a year by 2017, but the organisation said they would need raise the figure to 80 million tonnes to make the target feasible. Coal use in Shanxi and Inner Mongolia would have to come down as well. [Source]