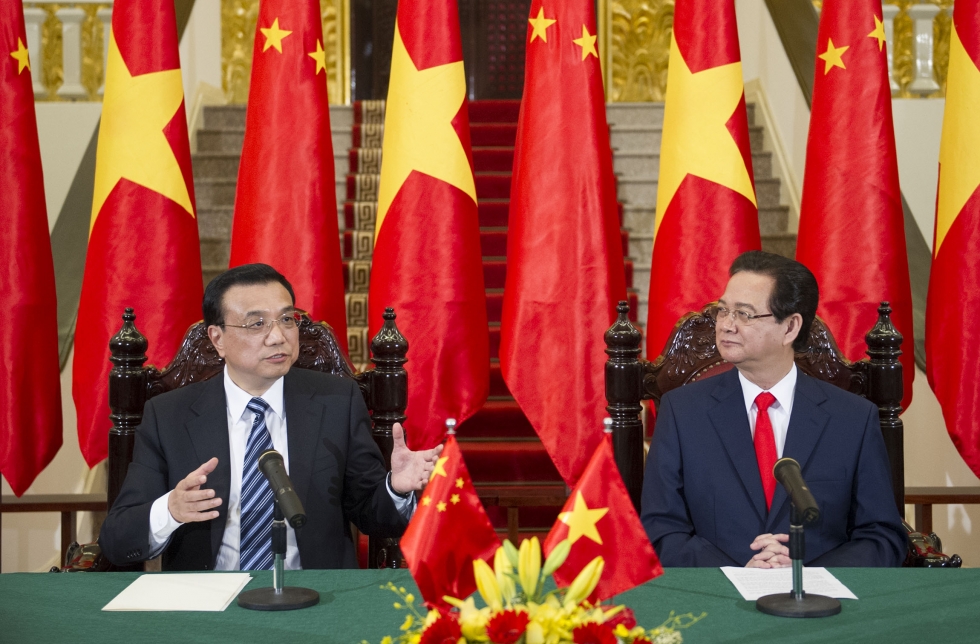 While U.S. President Barack Obama has remained stateside to deal with his government’s fiscal impasse, Chinese president Xi Jinping and premier Li Keqiang have mounted a diplomatic offensive in Southeast Asia. Teddy Ng of the South China Morning Post reports that Beijing’s latest diplomatic achievement came in Vietnam on Sunday, when the two sides agreed to form a working group to jointly explore the disputed waters of the South China Sea:

There were no concrete details about how such a project would proceed, but observers said securing the agreement with Vietnam – one of the two strongest claimants to the disputed areas, along with the Philippines – indicated that Beijing’s recent tactics had paid off.

“This is a positive result, and the long-term impact of it will need to be observed,” said Yu Xiangdong , director of the Institute of Vietnam Studies at Zhengzhou University.

Beijing had previously called for claimant countries to set aside their disputes by looking towards joint exploration of the waters, but Beijing’s increased surveillance of the area has triggered fears about the China’s growing assertiveness and military might.

The Sino-Vietnamese agreement indicated that China might have softened its approach towards other claimants. [Source]

The New York Times reported that Li’s performance in Vietnam “flew in the face” of the advice given by U.S. secretary of state John Kerry, who urged ASEAN to stick together in its territorial disputes with China and establish a universal code of conduct for the South China Sea and other parts of the region:

At a previous Southeast Asian forum, in 2010 in Hanoi, Mr. Kerry’s predecessor, Hillary Rodham Clinton, was at loggerheads with the Chinese foreign minister, Yang Jiechi, over the South China Sea. But there was no public dust-up between Mr. Kerry and Mr. Li. Instead, they held a polite closed-door meeting during which the South China Sea did not seem to have taken up much time.

Then they went their separate ways. Mr. Li spent two days in Thailand, inspecting a Chinese high-speed rail exhibit in Bangkok and meeting with Princess Sirindhorn, a favorite of the Chinese government for her interest in Chinese culture and her frequent visits to China.

By contrast, Mr. Kerry — who was substituting at the summit meeting and subsequent Southeast Asian stops for President Obama, who had canceled his tour because of the fiscal impasse in Washington — flew to Malaysia and stayed less than 24 hours. He canceled a planned trip to the Philippines (where Mr. Obama was supposed to be the star), saying a typhoon would have prevented him from leaving once he landed. [Source]

The Economist, however, warned against assuming that recent events have dramatically shifted the status quo:

A few weeks of diplomatic activity have not changed the fundamental reality—that South-East Asia looks to China as its main trading partner and America as the prime guarantor of its security. They have, however, heightened a perception that power in the region is shifting. A commentary in the Jakarta Post, an English-language newspaper in Indonesia, argued bluntly that “it is China, not the United States, who is the leader of the Asia-Pacific region in the 21st century.” Pointing to Mr Obama’s no-show and the government shutdown, it concluded that his “much touted ‘pivot’ to Asia feels more like a pirouette with an overemphasis on military engagement.”

The Chinese press is happy to foster the impression of a power shift, taking the argument beyond South-East Asia. Its official news agency, Xinhua, published a commentary calling for a “de-Americanised world”. It argued that, with the possibility of a sovereign default by the superpower, “such alarming days when the destinies of others are in the hands of a hypocritical nation have to be terminated.”

That notion attracts some sympathy in South-East Asia but few would want an American-led international order to give way to one dominated by China. Some Vietnamese officials thought the criticism of the timing of Mr Li’s visit to Hanoi was unfair. After all, he was there in time to offer condolences at a time of national grief. But it is not just in Vietnam that many are prepared to think the worst of Chinese motives. [Source]