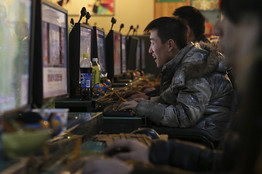 When China’s government wants the public to remember something, it tends to go with numbered lists.

In 2002, then-leader Jiang Zemin rolled out a new political ideology called the “Three Represents.” A few years later, Beijing attempted to shore up the country’s declining moral standards with the “Eight Honors and Eight Shames.”

Now it’s time to start paying attention to the “Seven Bottom Lines,” a list of online behavior guidelines that Internet users are being told to adhere to lest they incur the wrath of the country’s social media minders.

[…] Since the term was first coined in mid-August at the China Internet Conference, Sina Corp. has closed or otherwise “handled” 100,000 accounts on its Weibo microblogging service that have violated the principles, according to a Wednesday report from the state-run Beijing Youth Daily (in Chinese). [Source]

Sina had framed China’s first Internet community convention in May 2012 in an effort to curb online rumors and guide user ethics.

The system allows Sina to measure a user’s credibility. An account will be permanently deleted when a user’s credit point touches zero, the Sina Weibo employee said.

[…] Since the enactment of the convention, Sina has received about 1.5 million reports of online misconduct, removed over 1 million pornographic posts and deducted credit points from over 200,000 user accounts, the Beijing Youth Daily reported in June. [Source]

Sina’s policy anticipated a September ruling by the Supreme People’s Court that deliberate lies reposted more than 500 times could be punished with up to three years in prison.

Explaining the ‘Seven Base Lines’ at China Media Project (via CDT) in August, however, David Bandurski noted that truthfulness was listed last. Of the 100,000 penalized accounts, barely more than a thousand were punished for “distributing untruthful information,” feeding suspicion that Beijing’s ostensible rumor crackdown is really a cloaked attack on dissent. From Oiwan Lam at Global Voices Advocacy:

Originally, the Weibo CoP [Code of Practice] implemented by the CoP Community Center only sought to suppress the spread of commercial spam, indecent material, and rumors. However, judging from the newly released data, the target of the crackdown has shifted. Roughly 75% of the users are being punished for posting “personal attack comments” — but what constitutes a “personal attack” is highly arbitrary and entirely at the discretion of authorities. As one netizen pointed out, “this is just an excuse to silence those who are critical of the Chinese Communist Party (CCP)”. Another user pointed out that the Party-sponsored online commentators are “immune to” the community rule even when they have launched personal attack comments against political liberals. It appears that the so-called “community” rule only applies to dissenting voices. [Source]