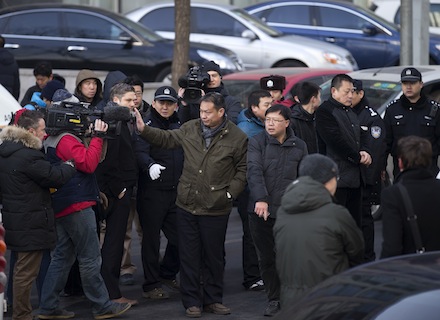 At Poynter, The Washington Post’s William Wan describes pressures on both Chinese and foreign journalists to self-censor—particularly, in the latter case, in light of visa refusals and delays suffered by Reuters’ Paul Mooney and The New York Times’ Austin Ramzy, Philip Pan, and Chris Buckley.

Last year, an annual survey by the Foreign Correspondents’ Club of China showed that 63 foreign journalists had been stopped by authorities in the course of their reporting, with at least nine cases involving violence. In the most recent case on Wednesday, journalists from CNN, BBC and other outlets were roughed up by police outside the trial of a rights activist, with the CNN reporter detained and his camera broken.

Despite that, FCCC president Peter Ford said in an interview in his Beijing office that aside from the recent Bloomberg allegations, “I don’t know of anyone who has held a story because they thought it would get them in trouble.”

[…] Despite the attention paid to foreign media in China, the increased threats faced by Chinese journalists these days are even more serious. Many report that more stories than ever are being censored and say they now at times even have to seek permission for interviews.

[…] Walking the line is a delicate affair — Chinese journalists have told me privately that you often don’t know you’ve crossed it until it’s too late and the consequences are crashing down upon you. In such an environment, they say, you begin identifying what you can’t report for yourself even before the government tells you. In recent years, the party has also replaced editors in charge of news coverage as a way of pre-empting sensitive reporting before it begins. [Source]

Caixin’s Wang Shuo wrote on Tuesday that, aside from political restrictions, investigative journalism in China is under threat from commercial pressures and routine piracy:

There is a huge demand for investigative reports, but the cost to produce them is rising. Then there are the risks that come with being a journalist in this country. In this light, it’s easy to see how business based on the conventional operating model is quickly melting away.

Investigative reporting faces another problem in China. These stories, which require huge amounts of time and effort, are under threat from widespread copyright infringement. Sometimes they are reprinted without permission. The author’s name is even left out. These things have become a common practice. Most major news portals have a “report laundering” process, which makes such violations a business. Content producers in China find that infringement has become an increasingly sustainable business, while originality gets rarer and rarer.

[…] But complaining won’t get us anywhere. We will devote ourselves to our reporting and to improving the circumstances in which we write. Journalists of the world unite, and wipe out these thieves! [Source]