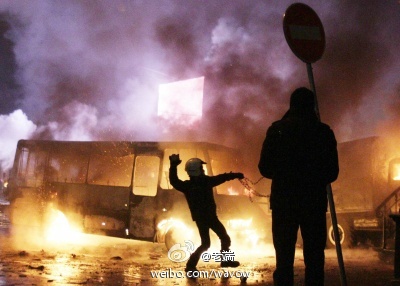 Central Propaganda Department: (1) Do not independently comment on the situation in Ukraine. Use Xinhua wire copy or follow authoritative state media in your reports. (2) the National Bureau of Statistics is about to publicly release its Statistical Comminqué on 2013 National Economic and Social Development. All news media (including electronic newspapers and journals, metropolitan financial media, and news websites) are kindly asked to strengthen positive analysis and extol a sunny outlook for China’s economy; do not quote [the communiqué] out of context, misinterpret it, or exaggerate or magnify existing difficulties and problems. (February 25, 2014)

The Global Times has warned readers that rapid democratization will lead to the type of chaos currently engulfing Ukraine. “Analyzing the breakup of the Soviet Union has become a cottage industry in China, and President Xi Jinping has made it clear that he will not be another Mikhail S. Gorbachev,” Michael Forsythe writes in the New York Times. As during the Arab Spring and the revolutions of 1989 before, the Chinese Communist Party fears that Ukraine could inspire organized resistance to its authority.