State Media and Public Opinion on the HK Protests 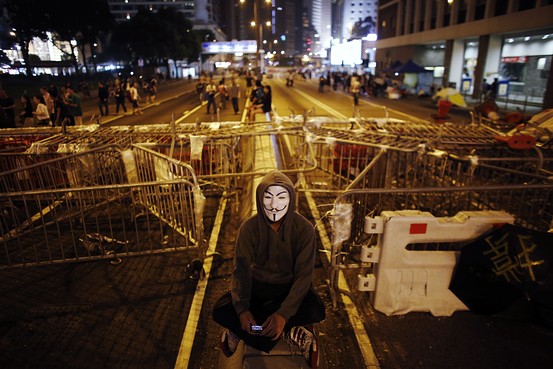 While the international media has been paying close attention to protesters in the Hong Kong streets over the past ten days, China’s official state media has been presenting a counter narrative while simultaneously making outside reports on the situation difficult to access. Last week, authorities ordered all news websites to republish an “open letter” from a U.S.-based Chinese national lambasting protest organizers and warning that “Western democracy is no panacea.” China’s external propaganda machine is also at work: an English-language Xinhua article quoted Charles Powell, former secretary to Margaret Thatcher, on “unrealistic” protesters and “biased” western media reports—in The Telegraph, Tom Phillips points out that Xinhua failed to print Powell’s statement on the right to peaceful protest from the same interview.

The column entitled “Occupy Central is backtracking democracy” argued that a minority of people have invaded the public interest for their own political views, which tramples on the principle of democracy and can never achieve democracy using such anti-democratic tactics.

[…] Two commentaries by “Guoping” were released by state media late last night, one on People’s Daily’s website and the other on the State Council Information Office’s affiliated portal.

[…] In the other commentary, the writer criticised “street politics” and said it would not succeed in changing the bottom line: that whoever governs Hong Kong must be “loyal to the state and to Hong Kong”. [Source]

CCTV has also been doing its part to discredit the pro-democracy movement. The New York Times looks at how the state broadcaster has drawn attention to an anti-Occupy infographic of dubious origins that has been circulating cyberspace:

Moving more confidently to shape the narrative around the pro-democracy demonstrations that have swept Hong Kong for more than a week, Chinese state television has broadcast a detailed infographic on the Occupy Central movement, rendered in trendy, matte shades of brown, orange and blue, and presenting the movement as illegal and backed by “foreign forces,” principally the United States.

The infographic, a text version of which started circulating on Friday among state-run media outlets, roused widespread interest on social media in China. Its exact origin is unclear — in its report, the state television broadcaster CCTV merely noted it was “a cartoon that began to circulate online last night.”

“Not bad, learn from it!” one user on Sino Weibo wrote of the infographic.

“‘Occupy’ denotes ‘Occupy Central,’ an illegal gathering currently taking place in our country’s Hong Kong Special Administrative Region,” the infographic reads. The word “illegal” stands out in red, whereas the other words are in white. [Source]

A post from Ran Liu at Tea Leaf Nation uses the situation in Hong Kong to explain why China’s propaganda apparatus—a system often scoffed at as blatantly Orwellian by outside observers—is so effective at influencing Chinese public opinion:

[…] To mainland Chinese who side with their central government, this peaceful Occupy Central movement is not really a demand for democracy at all: It’s a conspiratorial and dangerous threat to the national interest, the dignity of the state, social stability, and the sovereignty and territorial integrity of the People’s Republic of China. If these sound like well-worn terms in some Chinese Communist Party-controlled newspaper, that’s because they are; but they have also become part of the everyday language that Chinese use to discuss and understand social and political issues.

In fact, this language system, one essentially invented by party propagandists, is one of the major reasons that mainland Chinese have thus far proved much less sympathetic toward Hong Kong protesters than some outsiders have expected. The education system in China not only instills Marxism — which uses class relations and social conflict to explain all social, economic and political matters — but it also excites nationalist sentiments while emphasizing discipline and social adhesion.

The result is a whole vocabulary distinct from natural, daily communication — and a population primed to receive it. […] [Source]

Also see Tea Leaf Nation’s translation of a heavily reprinted anti-democracy article that has been shaping many mainlanders view of the situation in Hong Kong since July.

The Washington Post took to the Beijing streets to try to get their own read on public opinion in the mainland. While government efforts to control the narrative seem to be largely effective, the Post’s findings show that the media control keeping most of the public ill-informed is itself widely unpopular:

Guo Lin, a 20-year-old student at lunch with a friend in a KFC restaurant in the west of the city, said she was surprised how different the information she was receiving from friends through the Wechat social media platform was from that released on state-run China Central Television.

[…] Gauging public opinion is notoriously hard in China, where free speech on sensitive topics is extremely limited. But in conversations with a range of people in the capital Monday, there appeared to be little sympathy for the protesters’ main demand — that Hong Kong be granted full democracy — and a tendency to blame students, radicals or foreign governments for disrupting life there rather than the authorities in Hong Kong and Beijing for intransigence.

[…] A 34-year-old finance industry professional, Zhao Xiangang, said he thought the protests had been “manipulated by foreign forces” and were misguided. “Unity is the only feasible choice for China and is in alliance with Chinese culture,” he said. “Democracy, in its nature, is in contrast with unity, which calls for some proper control and dictatorship.”

[…] In all, 20 people said the Chinese government should end its censorship of the protests so they can find out what is really happening there. [Source]

Terms related to Hong Kong’s pro-democracy movement are forbidden from social media, making online public opinion nearly as difficult to survey. As is custom in China’s cyberspace, many crafty microbloggers are employing satire to show their solidarity with protesters in Hong Kong. From The Economic Times:

China’s defiant microbloggers used jokes and satire to back Hong Kong’s pro-democracy protests breaking through official censors while state media denounced the agitation as “anti-democracy” movement seeds of which were planted under British colonial rule.

[…] Mo Jiaqing, a consultant at a Hunan-based think tank, made fun of CCP propaganda that frequently trumpets China’s “advanced” society.

“If nearly 1.4 billion people in China mainland are benefiting from the world’s best society…then why not share it with Hong Kong’s seven million and Taiwan’s 23 million residents, instead of letting them suffer in the capitalist world under the ‘one country, two systems’ principle?” […] [Source]

For realtime live blogs from Hong Kong, see the South China Morning Post and The Wall Street Journal. Also see prior CDT coverage of the ongoing protests in Hong Kong or the Hong Kong democracy movement.