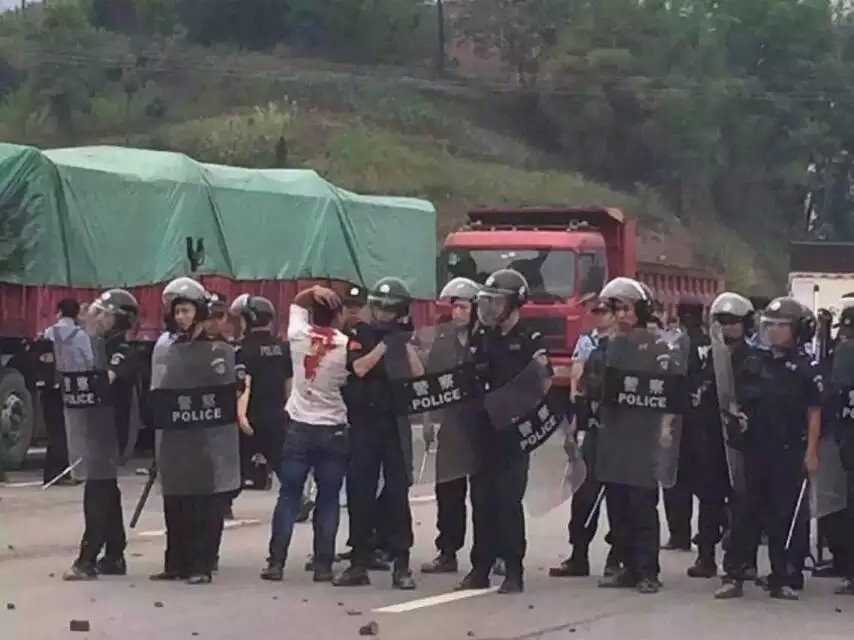 Regarding the assembly of groups to “save the [rail]road” and the disturbance of order in in Linshui County, Sichuan, coverage must accord with Xinhua News Agency wire copy and information released by the local authorities. Control comments on news web pages. Delete text, images, and video posted by netizens concerning clashes with the police. (May 18, 2015) [Chinese]

Protests in Linshui on May 16 turned violent as residents protested to keep a planned high-speed rail line, which they may lose to nearby Guang’an, birthplace of Deng Xiaoping. Photos have emerged of SWAT teams beating people in the street and protesters bleeding from the head.

The Internet was cut off in the entire county, according to the Financial Times’ James Anderlini. While Baidu and Weibo searches for “Linshui” (邻水) pull up official media reports and long shots of protesters, photos of riot police and protesters clutching head wounds dominate Twitter results. A group that calls itself the “Anti-Communist Party Hackers” apparently hacked a local public security bureau website, posting the message, “Fucking CCP! Get your bastard police the hell out of Linshui County!”:

The Chinese news portal Eastday reports that “it is too early to discuss the route“:

The line is designed to link Dazhou in Sichuan province with neighboring Chongqing. According to a notice on the website of the Sichuan Development and Reform Commission on Monday, the line is “still being planned and has not been approved by the provincial and central governments”.

Only after it is approved by the State can the railway route be discussed, said the notice, and then Sichuan will seek suggestions from the public on places the railway should pass through. [Source]

At Tea Leaf Nation, Bethany Allen-Ebrahimian notes that the potential economic gain for smaller, more remote towns has catalyzed protests to save high-speed rail in rural Henan and Hubei in recent years.