A Man’s Fight Against Gay Conversion Clinics in China 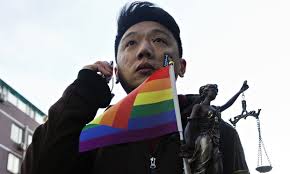 Meanwhile, the Supreme Court ruling that struck down same-sex marriage bans throughout the U.S. has sparked debate in China. The International Business Times’ Duncan Hewitt reports on competing views on the high court ruling from Chinese state media outlets, and the role that Chinese Internet companies play in promoting tolerance for homosexuality:

“I’ve never seen so much debate in both the traditional media and social media – so many people, and in so much depth,” Ah Qiang, director of Guangzhou-based Parents and Friends of Lesbians and Gays (PFLAG) China, which campaigns for gay rights, told International Business Times. “In the past when smaller countries passed these bills, there wasn’t so much reaction. But Chinese people are especially interested in the U.S. — so many Chinese people are travelling there now, or moving there to work. So now they have to face up to this issue.”

And some experts said the ruling could have a significant impact in China, coming at a timely moment when gays in the country are becoming more outspoken — yet the government is also pushing back against many aspects of growing social openness:

“The US ruling … will be a boost for the gay rights movement here. I’ve noticed that there are more heterosexuals who support [gay marriage],” sexologist Li Yinhe, who has regularly — and forlornly — proposed bills legalizing gay marriage to China’s legislature, told Monday’s Global Times.

At the same time there was also angry criticism in the Chinese media: Shanghai-based news website The Paper published articles by several philosophers, including Prof. Zeng Yi of Tongji University, who described the U.S. decision to approve gay marriage as a “crime against humanity,” and stressed that the purpose of marriage was to have children. […] [Source]

While homosexuality was decriminalized in China in 1997, same-sex marriage and civil unions remain unrecognized.