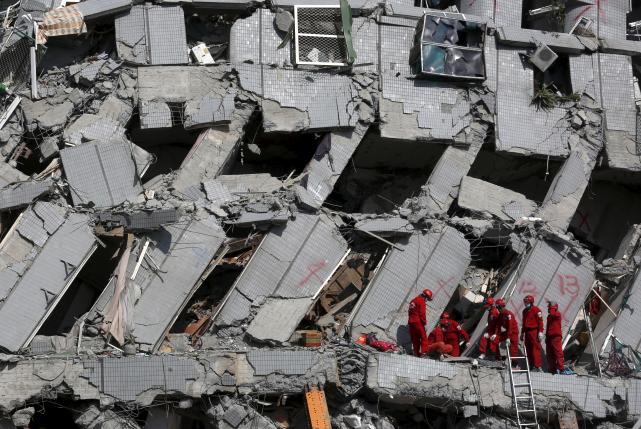 At least 38 people were killed and hundreds more injured Saturday morning when a 6.4 magnitude earthquake struck the southern Taiwan city of Tainan just before 4 a.m. two days ahead of the Lunar New Year. Rescue efforts continue today, with search teams combing the ruins for survivors and those who remain missing. J.R. Wu and Damon Lin at Reuters report:

Rescuers pulled out alive an eight-year-old girl and her aunt from the rubble of a Taiwan apartment block on Monday, more than 60 hours after it was toppled by a quake, as the mayor of the southern city of Tainan warned the death toll could exceed 100.

[…] Tainan Mayor William Lai said during a visit to a funeral home that rescue efforts had entered what he called the “third stage”.

“There are more fatalities than those pulled out (alive), and the number of fatalities will probably exceed 100,” Lai told reporters.

Rescuers continued to scramble over the twisted wreckage of the building as numbed family members stood around, waiting for news of missing relatives. [Source]

At South China Morning Post, Lawrence Chung looks at the magnitude of the quake and the extent of the damage that has been caused:

The epicentre of the quake, which reportedly had the power equivalent to two atomic bombs, was actually located 45 km away from Tainan in Meilung, in Kaohsiung City, Kuo Chi-wen, director of the earthquake centre under the Central Weather Bureau, said.

“But Tainan was hit hardest of all because it is a big terrain with relatively soft geological formation. The impact tends to be amplified when it is a shallow earthquake,” Kuo said.

The shockwave in Tainan was reported to have lasted 44 seconds, compared with one of less than 20 seconds in Kaohsiung, the earthquake centre said.

The Tainan government said the quake had led to the collapse of nine buildings, including Wei Guan, and damaged five others in the city. Two people had been killed by falling objects during the tremor, but no residents in other buildings in the city had been killed. [Source]

The news of the Tainan temblor quickly traveled across the strait to mainland China, where Web users pointed out the difference they perceived between Chinese relief work and what they were seeing in action on the ground in Taiwan.

[…] Given the strict censorship measures that China has put in place on social media, mainland Chinese netizens could not openly compare disaster relief work in China and Taiwan. Instead, they shared one of the Tainan city government’s progress reports on earthquake relief work on social media to show how democracy makes a difference in recovering from a disaster. The progress report presented detailed updates on the calamity, the locations of newly set-up relief centers and the number of relief team members in each affected district. The reports are released to the public a few times a day.

In mainland China, disaster reporting typically spotlights the country’s leaders coordinating the rescue work in the affected area and doesn’t mention any of the concrete details of the relief measures. Mainland Chinese netizens spotted the difference when reading the Tainan progress report. […] [Source]

Elsewhere on Sina Weibo, reactions toward the Taiwan earthquake was mixed. The following is a selection of Weibo comments translated by CDT:

NankeRshy (@南柯Rshy): Are you sure that not a few compatriots are gloating? Why must you always assume the worst spitefulness of your compatriots?

Yuciweizuihoudeduihua (@与刺猬最後的對話): Taiwan’s buildings aren’t so great. Some of the people on their own island are fed up with democracy going too far. If there’s word about cutting down one tree they have to squabble over it, and they basically don’t get anywhere. As for the spite of the mainlands you speak of? Hehe, you sure are biased~ [Chinese]

China Real Time has gathered and translated a collection of photos and comments shared on social media by people at the disaster zone.

Most of the earthquake victims were from Tainan Wei-guan Golden Dragon Building, a 17-storey apartment complex where hundreds are missing and believed to be buried under the rubble. Witnesses at the scene reported seeing commercial oil cans exposed from the walls of the collapsed building that appear to have been used as construction material. In response, the Taiwanese government has launched an investigation into the quality of the apartment’s building materials. Victoria Ho at Mashable reports:

Images have been circulating online of cooking oil cans clearly visible in pillars of the collapsed Wei Guan Golden Dragon Building in Tainan City, which was built in 1989. Some are questioning whether the oil cans were used as shoddy filler material in the building’s construction, and if this had a part to play in the building coming down in the quake.

[…] Interior minister, Chen Wei-zen, said an investigation has been launched into whether the building’s developer had cut corners, but noted the building had not been listed as a dangerous structure before the quake.

Albeit an alarming sight, the cooking oil cans may not have been that much of a structural liability, a building technician told Taiwanese paper, Apple Daily. Tai Yun Fa said the metal oil cans are sometimes used in decorative pillars that aren’t weight-bearing, and the light barrels can help reduce the overall weight of the building and benefit its structure. [Source]

While the investigation is still underway, a past loan rejection on the Wei-guan Golden Dragon Building suggests that problems were long present before the earthquake struck. From The Japan Times:

Before their apartment tower collapsed in a Taiwan earthquake over the weekend, a young couple living on the 14th floor had already been given a clue that the building was unsafe.

[…] Chen Yi-ting and her husband bought the apartment in the center of Tainan city five years ago, having relocated from an outlying district. They had a small hiccup with the mortgage — the first bank they approached had declined their loan application without stating why — but they found another lender and moved in with their infant daughter.

Soon after, according to Chen’s mother, one of the couple’s friends, who had ties to the first bank, told them that it had a policy of refusing loans to residents of the 17-story Wei-guan Golden Dragon Building, due to its poor construction.

[…] “People from outside of the town, people like them, had no idea what was going on before they moved in,” Chen’s mother, Kuo Yi-chien, explained as she waited in a hospital corridor outside the intensive care unit where her daughter is. [Source]