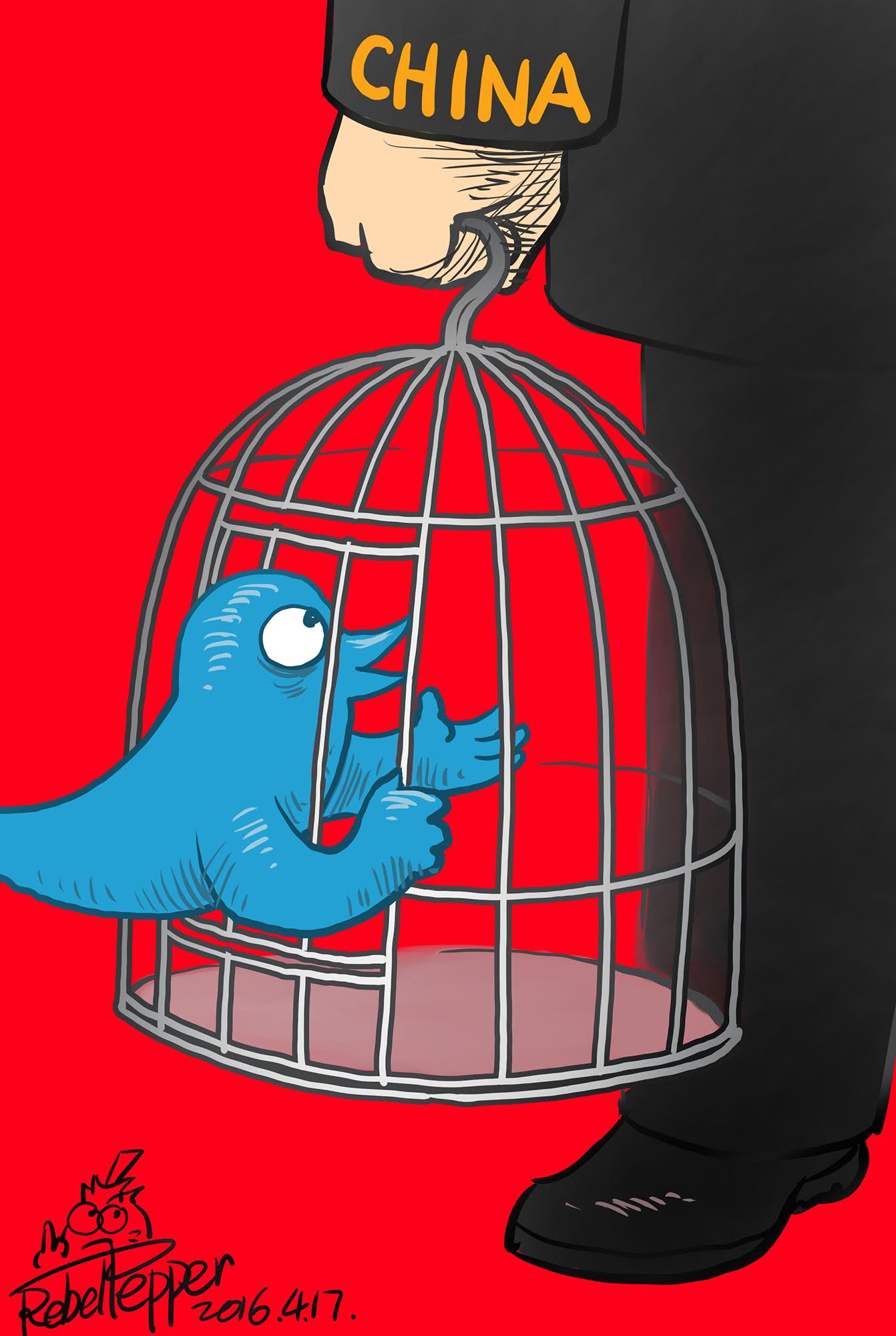 Both Badiucao and Rebel Pepper reflect Chinese Twitter users’ concerns over the company’s hiring of veteran technology executive Kathy Chen in the role of Greater China Managing Director, while the site remains blocked in China. Chen, who will mainly work to attract advertising contracts from Chinese companies through the company’s Hong Kong office, has come under fire for her initial tweets reaching out to Chinese official media, and for her background working with the Chinese government and security apparatus. Both cartoonists express widely held fears that the move threatens Twitter’s role as a bastion of free speech. On Thursday, Twitter CEO Jack Dorsey announced that the Managing Director position for Greater China would be filled by Chen. This was quickly followed by a congratulatory message from Xinhua. A series of tweets from Chen’s apparently brand new Twitter account then responded to Xinhua and People’s Daily, expressing hope for a cooperative partnership.

A big welcome to Twitter, @KathyChen2016! She joins us as our MD for China!

@XHNews Thanks and look forward to closer partnership in the future!

@cctvnews @jack let's work together to tell great China story to the world!

[…] “Because of the success we’ve seen, we want to expand the investment we’re making in [the region],” Rao said. “Kathy Chen will be responsible for developing the strategy and running the business.”

[…] In the Greater China region, Twitter is focused on growing its advertising business as opposed to user acquisition due to the restrictions imposed on the company’s consumer service in China, said Rao.

“We would love to offer our Twitter consumer service to Chinese users, but that’s not an option right now,” said Rao. “Instead we will focus on leveraging some of our capabilities to create value for Chinese businesses and state-owned enterprises.” [Source]

Upon hearing the news, Chinese netizens quickly dug up more information about Chen’s background. At China Change, Yaxue Cao summarizes what is known about Chen and why her appointment has been the subject of concern for many Twitter users:

It’s only natural that Chinese Twitter users were highly curious about Twitter’s new managing director for Greater China—and they were repelled instantly. According to Baike, China’s equivalent of Wikipedia controlled by Baidu, Kathy Chen (陈葵) graduated with a degree in computer science from Beijing Jiaotong University in 1987. She immediately joined the People’s Liberation Army’s Second Artillery—China’s strategic missile force—and became an engineer in its No. 1 Research Academy. There, according to another article, she worked “as a programmer on the top-secret missile protocol design.”

[…] For the next four years, until 2004, Chen was the CEO of a newly-founded software company called CA-Jinchen, which primarily supplies anti-virus software. The firm is a joint venture between Computer Associates International (now known as CA Technologies) and China’s Ministry of Public Security, the first US-China software joint venture. Leveraging the resources of China’s public security apparatus, CA-Jinchen’s products are used in finance, government, the military, enterprises, telecommunications, education, the energy sector, and many key network systems. Reviewing CA-Jinchen’s 10-year history in 2008, Chen’s successor said: “China Jinchen Security Technology Co., Ltd. joined with the second-largest global software firm Computer Associations in a strategic partnership, promoting anti-virus technology globally and bringing ‘Preemptible Kernel’ technology into China.” She also remarked that: “Public security, the military, and the government are the troika behind Jinchen.”

[…] Are there any problems here? To begin with, Chen is without a doubt a Chinese Communist Party member, based on a common sense understanding of China. She has been through the most strict and exacting process of political examination, and has been found by the Party to be reliable—all this is certain. My sense is that Kathy Chen’s rapid shift from extremely secret and politically sensitive missile protocol design work, straight to an American software company, is very unusual: in China, even a regular member of the armed forces dealing with secret information isn’t allowed to make overseas visits as they wish, either while in the army or soon after leaving (I have some anecdotal evidence here and here). They may apply, but I understand that it’s difficult to gain approval. I think it’s a fair assertion that Kathy Chen’s transition from a programmer of top-secret missile protocol to DEC sales could only have happened with the approval of a Chinese government agency. And then there are the four years with CA-Jinchen, which raises questions about the depth of Chen’s involvement in China’s public security sector. [Source]

Internet users noted that Chen’s use of the phrase “tell China’s story” in her tweet to CCTV reflects the phrasing recently used by Xi Jinping as he has emphasized the need for the media to speak for the party.

.@kathychen2016 @cctvnews @jack how about first getting the CCP to unblock Twitter unconditionally? That would be a GREAT China story!

New Twitter China head worked in PLA and state media. This is just too funny.. https://t.co/3cXTQt0dQs

@Twitter in a crisis for survival. @Jack 's hiring of @kathychen2016 is a desperate move for profit, Chinese users are alarmed accordingly

Meanwhile, blogging platform Medium, which was cofounded by former Twitter CEO Evan Williams, has also been blocked in China. At Tech in Asia, Erik Crouch looks at why certain social network sites—such as LinkedIn, Skype, and WhatsApp—are not blocked in China, while others—Twitter, Facebook, Instagram—are. He concludes, “Luck is the single biggest factor protecting the few uncensored social networks in China.”