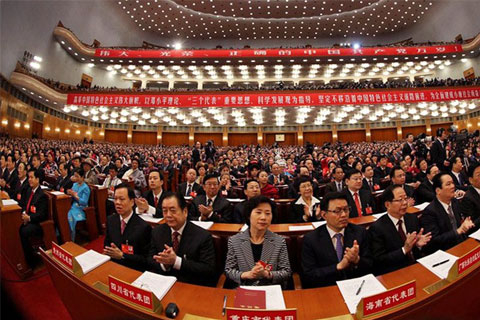 The Chinese Communist Party Central Committee’s Politburo has met this week and set the date for the upcoming plenary session in October. According to Xinhua, tightening rules for party discipline will be at the top of the agenda this year, a focus that is markedly different from previous plenums that have centered on economic reform and rule of law. Ben Blanchard at Reuters reports:

Tuesday’s decision followed a meeting of the Politburo, one of the party’s elite ruling bodies, chaired by Xi, the Xinhua news agency said.

“In the new situation, generally intra-party political life is good, but for some time now there have appeared some outstanding issues,” it said, without identifying the issues.

Xinhua gave no details of what the revised rules for supervision in the party would entail, but cited speakers at the Politburo meeting as saying the time had come to alter them.

[…] The October gathering is likely to be the final plenum before the party holds its five-yearly congress, expected some time in the autumn of 2017, where Xi will cement his power and possibly anoint a successor. [Source]

The change is expected to bring about tougher rules for party cadres and lead to more centralization of power in a move that will likely upend the fundamental concept of collective leadership that has guided Party conduct since its formulation in 1980. From Choi Chi-yuk at South China Morning Post:

In particular, the plenum would focus on the internal political conduct of leading party institutions and cadres, especially members of the Central Committee, its Politburo and the innermost Politburo Standing Committee, Xinhua said.

The original criteria for political conduct within the party stipulated that collective leadership was the overriding principle.

Drafted by liberal-minded former general secretary Hu Yaobang and endorsed by the fifth session of the party’s 11th Central Committee in February 1980, the resolution spelled out its opposition to “rule by the voice of one man alone” or a “patriarchal system”. It also encouraged internal democracy for the party and barred members from showing loyalty to a single person.

It is unclear which clauses will be revised, but Beijing-based political analyst Zhang Lifan said that the new criteria could be harsher and stricter for party members. “As a product of the party in the era of reform and opening up, the criteria effectively limited the concentration of power [seen in] Mao Zedong’s times,” said the historian, adding that times had changed and that it was likely there would be tighter controls, so as to make way for a new round of centralising of authority. [Source]

Officials would also be punished for their poor leadership and lack of loyalty to the party, the guidelines released on July 18 said, without giving details.

[…] The rules announced by the Central Committee, the party’s top decision-making body, also say that officials would be punished for attempting to divide the party by setting up different factions.Officials in high positions would be the first in line to be punished for violating the party’s disciplinary code, the Central committee said. Those who are found guilty of serious violations that result in tarnishing the party’s reputation or causing “major losses” to it would be demoted or expelled from the party, the guidelines showed. However it did not define what qualifies as a “major loss.”

The party already has a mechanism in place to refer a member to the state prosecutor’s office for a possible criminal investigation after its internal disciplinary committee has probed into violations linked to party rules.

The document explicitly stated that members who have retired could also be investigated for violating party rules during their tenure. [Source]

These guidelines follow recent Party restrictions on “improper discussions” by cadres, which have already resulted in punishments for journalists, academics, and officials. Officials who disagree with Party policies continue to be strictly disciplined:

Li has been outspoken on Weibo, questioning the official response to floods in Hebei and making sarcastic remarks about Foreign Minister Wang Yi. It was unclear which comments triggered the investigation.

[…] Under discipline rules amended in October, party members can be expelled for inappropriate comments about the party’s key policies, for vilifying party leaders or for distorting party history. The rule applies only to party members and Li declined to say if he was a member.

Teachers at the Central Party School were criticized by President Xi Jinping last December for making similar comments about party policies. Officials at the top cadre academy have since pledged to tow the Party line.

Elsewhere, South China Morning Post’s Cary Huang reports that President Xi visited a Red Army shrine in Ningxia last week to strengthen his position as the heir of the Party’s revolutionary cause ahead of the annual leadership meeting scheduled in August in Beidaihe.