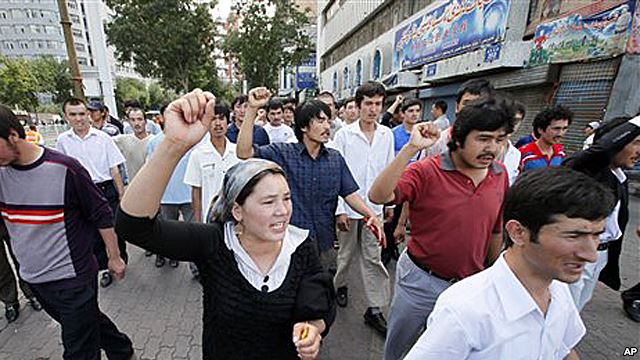 The South China Morning Post’s Nectar Gan cites state media to report that Xinjiang authorities have paid out over a million yuan ($160,000) to 16 police officers and two private citizens in Hotan for their contribution to “maintaining stability.” Hotan, in southern Xinjiang, has been the site of several recent fatal violent incidents.

Hotan county in the region’s south gave a total of 1.09 million yuan to the 18 recipients, who also included three police officers who were promoted and given a raise, the region’s official news website Ts.cn reported. The report did not elaborate on what contributions they made.

[…] The county’s Communist Party chief Lu Boran said cadres and members of the public who came forward at critical times to fight against terrorists and safeguard social stability should be amply rewarded, the report said.

In contrast, 14 other cadres were punished for dereliction of duty. The report did not specify their wrongdoings, but said they received various means of punishment ranging from being expelled from the party, removed from office, demotion or being handed over to the judiciary for investigation. [Source]

Cash incentives for information on alleged terrorists have been used extensively in Xinjiang during an ongoing crackdown on terrorism. The Global Times has more from Hotan Party chief Lu Boran, plus details on the ongoing local reward program:

“The three forces damage our homeland and peaceful life, endanger social stability and safety, so we have to firmly fight against them,” ts.cn reported, citing one of the awarded officials.

In February, Hotan Prefecture authorities offered a reward of up to 5 million yuan to people who report and provide clues on terrorist activities.

Those who provide crucial tips about terror attacks aimed at densely populated areas and crowds or government buildings would get a reward of 3 to 5 million yuan. Those who report terrorists and religious extremists who mobilize, swear allegiance to jihad, or orchestrate and organize illegal cross-border activities would get 2 to 3 million yuan.

Tipsters who wish to stay anonymous can provide their bank account information to the government and will not be publicly rewarded. [Source]

The reported stability rewards in Hotan come amid a nationwide crackdown on terrorism, launched in 2014 in response to increasing incidents of violence in Xinjiang and elsewhere in China. Last month, region-wide rules against “extremist behavior,” including wearing face veils or long beards, were released. The crackdown has also recently included massive military rallies, a hardening of anti-terror rhetoric, and increased surveillance measures. Dozens of Xinjiang Party officials have also been punished for inadequately monitoring locals in the pursuit of maintaining stability, and last week a Uyghur official was reportedly demoted for “not daring” to smoke in front of religious elders.