Skeptical of mainland media accounts, human rights lawyer Chen Qiushi traveled to Hong Kong in August amid ongoing pro-democracy protests in the city. In one of his live broadcasts from Hong Kong, the 34-year-old said, “I’m not a mainland agent, nor a journalist. I’m an ordinary mainland Chinese citizen, making a living as an attorney. […] Hong Kong is going through a historical period, I want to come here and bear witness to this history.” In contrast to state media reports that focused on protester violence, Chen reported that he saw largely peaceful assemblies. The lawyer’s trip was cut short after he was called home by mainland Public Security officials, was repeatedly “criticized and educated” by authorities, and saw his popular TikTok and Weibo accounts shuttered. Determined to continue speaking out, Chen then opened Twitter and YouTube accounts, where he has regularly been sharing his opinions.

This week, the Australian Broadcasting Corporation’s Chinese-language outlet interviewed Chen after the rights lawyer said he had been prevented from leaving China by authorities. CDT has translated the interview, which offers a look into the opinions Chen is serving up on YouTube and Twitter, notes the impressions his supporters and detractors in China have of him, and explains his current situation of being closely watched by authorities:

Well-known mainland lawyer Chen Qiushi, who went to Hong Kong to witness the anti-extradition movement demonstrations, recently announced on his personal Twitter that on December 10, before a trip to Japan, he was informed by the Tianjin Public Security Bureau that he was restricted from leaving the country.

On December 11, Chen tweeted a WeChat moments screenshot showing that he had planned to go on a 40-person tour group in Japan with his mother. After repeated negotiations with the police, they allowed him to go to the airport along with two police officers to bid farewell to his mother and the tour group members.

Chen Qiushi said that he doesn’t blame these police officers, because there are many lawyers in China who have been “arrested, beaten, or persecuted,” and currently face a much more difficult situation than he, and that furthermore the police are only doing this to “keep food on their table.”  But, he said that he is likely being monitored by authorities.

“Living in mainland China, my assets, communications, and everything else in my personal life are all transparent,” Chen wrote in that WeChat Moments circle.

“This is an enormous and cruel system. In this system, we are all ants in a gilded age, and we are all very pathetic,” he said.

According to the understanding of ABC Chinese, mainland media didn’t report on this incident. Baidu searches for “Chen Qiushi” yielded no recent news reports. ABC attempted to contact the Tianjin Foreign Affairs Office, Public Security Bureau, and Entry and Exit Administration for comment, but received no response before publication.

In an interview with ABC Chinese last month, Chen also mentioned that his WeChat and phone may be monitored, including during the interview. In effort not to implicate his partners, he had over the past six months been withdrawing his investments.

“When a person has nothing, his fears can decline,” Chen told ABC Chinese.

“I define myself as a person who has nothing, no sons, no daughters, no house, no car, no assets, and no family,” he said.

The 34-year-old Chen has made himself known through his “I am A Speaker”  series of objective and rational speeches.

In August, in order to verify official media reports of large-scale demonstrations in Hong Kong, he went to the island to share his experiences with those in the mainland through live broadcasts. He said that most people there were demonstrating in a peaceful, rational, and non-violent manner.

Mainland authorities called and halted his trip to Hong Kong after four days. Chen confirmed to ABC Chinese, the Beijing Lawyers Association sent back his authorized license, signifying that he was unable to hold a post at any Beijing law firm. After that, his TikTok and Weibo, which each had over a million followers, were permanently shut down.

Even Going For a Massage, a Friend Must Come Along

At the start of October, Chen Qiushi registered accounts on Twitter and YouTube, speaking his opinions on these two platforms that are blocked in China. Within two months, he has already accumulated 120,000 followers on the two platforms.

In most of the videos and posts, he advocates for pluralism and human rights, speaking mildly and with reason, calling on people to rationally consider the current state of Chinese society.

Returning to the August 18 Hong Kong gathering, Chen Qiushi told those present that he hopes they could offer the people in the mainland a bit more understanding, and that he hopes the world can give them more time and patience.

“In the mainland the rate of people who make it past undergraduate education is not high, no more than 5%, while 99% of those over 50 haven’t received any higher education,” Chen Qiushi said.

“A billion people haven’t been abroad, 99% of Chinese haven’t ever used the [uncensored] internet… I hope the world can give the Chinese people a little more time,” he said.

While taking this interview with ABC Chinese, Chen Qiushi expressed that the Chinese people are lovable in some ways, yet in the enormity of China there still remain sayings from a type of class struggle: “For class enemies, we must implement a bad reputation, economic ruin, and physical destruction.”

So, he said that if he persists in speaking out, he explicitly mustn’t do illegal things, and must live cleanly and honestly.


“For example, when my neck hurts, even if I go to a massage parlor I must ask my friends to go with me as I’m afraid it might be suspected that I’m visiting prostitutes… There can’t be any reason for me to be detained,” he said.

“I have no assets, no house, no car, no kids–I’m not afraid of economic ruin. So the best way to deal with me, is physical destruction.”

The World Must See the Chinese People, Not Only China’s Government 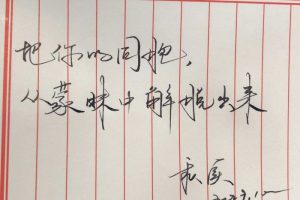 [Shared] in a tweet Chen Qiushi wrote, “Release your compatriots from the ties of ignorance.” (Supplied)

Many fans think that to have hope China needs many more Chen Qiushis, but actually, his opinions also often attract objection. Some people say they support Beijing ”taking measures” against him because he’s a saboteur. “So-called dissidents and public figures like Chen Qiushi, in a country like China, are equivalent to malignant cancer cells in the human body. The country should take action to cut off the food supply to cancer cells,” a netizen tweeted. Chen Qiushi also said he hopes more and more people can help mainlanders understand the world, and that he encourages overseas Chinese to “build that bridge.”“We don’t necessarily need to talk about politics. Just let everyone see what the sky is like in Australia, what is the coast like? What is health care like, education, kindergarten, zoos,” he said.“Chinese people need to see the world, and the world needs to work hard to show itself to Chinese people. The world also needs to take a look at the people of China, and not just China’s government.” [Chinese]

CDT earlier translated the last live broadcast Chen shared from Hong Kong before being called home. Additional videos by Chen can be viewed via CDT Chinese, or on his Twitter and YouTube accounts.

Last week, Guangzhou hosted the Global Lawyers Forum, and critics pointed out that this came amid an ongoing “War on Law” in China that culminated with the 2015 Black Friday crackdown on rights lawyers and advocates. The forum coincided with International Human Rights Day, which the E.U. delegation to China marked by highlighting “continuous arrests, detention and imprisonment of human rights defenders, lawyers and other citizens.”