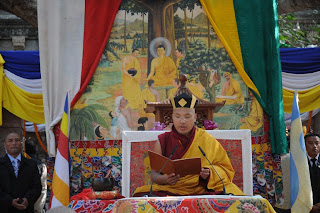 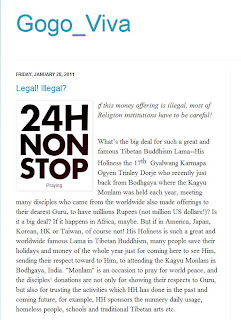 If this money offering is illegal, most of Religion institutions have to be careful!

What’s the big deal for such a great and famous Tibetan Buddhism Lama–His Holiness the 17th Gyalwang Karmapa Ogyen Trinley Dorje who recently just back from Bodhgaya where the Kagyu Monlam was held each year, meeting many disciples who came from the worldwide also made offerings to their dearest Guru, to have millions Rupees (not million US dollars!)? Is it a big deal? If it happens in Africa, maybe. But if in America, Japan, Korean, HK or Taiwan, of course not! His Holiness is such a great and worldwide famous Lama in Tibetan Buddhism, many people save their holidays and money of the whole year just for coming here to see Him, sending their respect toward to Him, to attending the Kagyu Monlam in Bodhgaya, India. “Monlam” is an occasion to pray for world peace, and the disciples’ donations are not only for showing their respects to Guru, but also for trusting the activities which HH has done in the past and coming future, for example, HH sponsors the nunnery daily usage, homeless people, schools and traditional Tibetan arts etc.

So it’s not a big deal for having the money after the great Monlam, especially currencies from 25 countries! This also means more than 25 countries’ people have came to India to enhance Indian economy! So, people won’t be surprised about the amount of money. Especially, the money was offered by all the disciples around the world. In Buddhism, you can offer as much as you can, as you want. It’s not about legal or illegal. It’s about faith. If the money is detained by claiming it’s illegal therefore someone need to make a proof to all the disciples even all the Buddhists its illegal reason. We hope people from other countries won’t get a bad impression that India may be a country which is “religion terrorism”. As a Buddha’s home country, we truly wish this wouldn’t ruin India’s reputation, especially this beautiful country still trying hard to keep its nice characters and traditions since the Buddha’s time.

The whole India celebrated the Independent Day on this Wed. which represents it’s a country understands the value of freedom due to many silent revolutions for achieving to the current situation. Many years ago, HH the 17th Karmapa with the expectation to continuing his responsibility of Tibetan Buddhism lineage risked his life to India, afterward the Government of India very kindly gave him (one of the most important Lamas in the world) a refugee status for staying in India. However his action is confined till today, even visiting HH Dalai Lama still need approval. The reason is because of unknown information suspecting him having the connection with China authority. Although no one proves what the “unknown” information is and where it comes from so far.

These 2 days, most of the news reports claimed the money which found is for some “illegal” land deal, the investigation is still in process but this conclusion seems has already came out!

If you know HH Karmapa lives in a room which may be smaller than yours (actually smaller than most of ours), then how will you feel? Especially for those disciples who respect him sincerely. So if someone really wants to donate the land without notifying HH also without a consent from Him, that’s normal, in Tibetan Buddhism, that’s normal! During the time of Lord Buddha, Anathapindika sought a suitable place for the Buddha’s residence, so he covered the golden coins on the Jetavana in order to buy it to provide the Buddha a place to proceed the Buddha’s activities. This was a beautiful tradition, a beautiful tradition in Buddhism, a beautiful tradition from the ancient India.

In ancient time, it was the most auspicious thing to make an offering to the Buddha, same as today! If you have a coin to offer to the Buddha, would you say no? In addition, If you were rich enough to offer a house even a land to the Buddha, you would not hesitate to do so. How can you miss this precious opportunity to gain your merit through offering? People who are not Buddhists maybe curious about it, but it’s faith, there are many examples to prove how faithful people are in other religions. So, how can we deny faith? How can we define offering is illegal? Americans even show their faith in their bills (In God We Trust).

So, this money is no longer different than the golden coins for offering to the Living Buddha! If the money is detained by claiming it’s illegal therefore please show the whole world its proof of illegality to all the disciples, all the Buddhists. If offering is legal then the money offering is legal. If offering is legal then a watch, a book, an ipad (can you say “no” to Steve Jobs?) a car, a house even a land offering is legal! Most of all, the key point is if “the people” can’t define or show evidences of “offering” illegality then they should go to the deeper part, look deeply, they’ll see the FAITH. Once they see “faith” they’ll realize it is no longer about legal or illegal but FAITH!