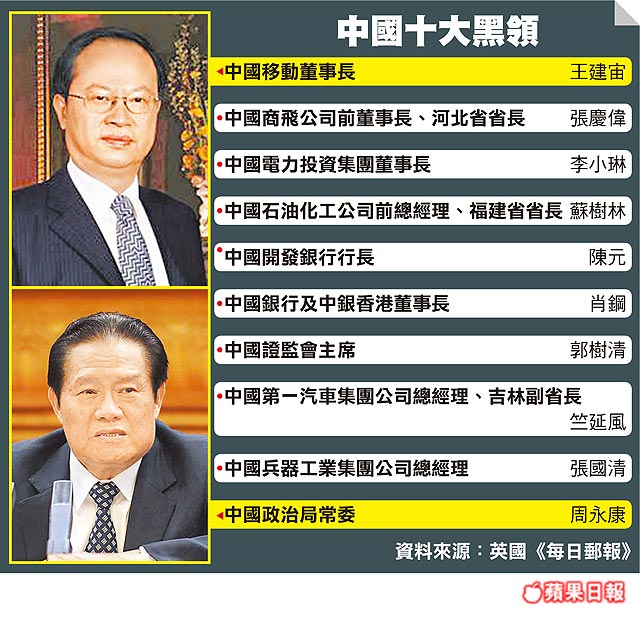 China’s ‘black collar class’ unmasked: The ten most powerful business chiefs who are poised to take over the world – http://www.dailymail.co.uk, 29th January 2012

They dress in dark suits, drive black limousines and have rumoured links to ‘black societies’ from the underworld.

Until now these shadowy mandarins leading the charge of China’s thundering economy have remained hidden.

But after a groundbreaking report, the ten most powerful bosses behind China’s terrifying brand of state capitalism have been unmasked.

They include business dynasties that have ruled firms for decades, according to reports from the Brookings Institution, specialist Chinese publications and the Sunday Times.

These ‘red dragons’ are now set to become as powerful as the Chinese military, provincial leaders and government ministers.

Between them they control the majority of the Chinese economy, where corruption and vested interests are hidden behind a cloak of secrecy.

And with the rest of the world teetering on bankruptcy, these unstoppable bosses are poised to take take over a string of Western companies.

It’s a thundering assault on the rest of the world from a country that controls virtually every aspect of its citizens lives.

These are the ten most powerful members of the ‘black collar’ elite driving China’s alarming expansion.

Qingwei was the former boss of the Commercial Aircraft Corporation of China (Comac).

Under his leadership the company has fought to wrestle back control of the Chinese skies from Boeing and Airbus.

The communist state has little time for dependance on foreign companies, and has battled to create a fleet of planes that will compete for passengers.

In a sign of his influence and power, Qingwei has been singled out as the state entrepreneur most likely to win political office. He has begun that march up the communist party, with an appointment as a provincial governor.

Anybody who has used a mobile phone in China will have used Jianzhou’s company – China Mobile. The mobile phone network is the largest and most powerful in the world, with an estimated 650million subscribers.

In its aggressive spread across the globe, China mobile has even provided reception for  one of the hardest places on earth to reach – Mount Everest. The firm has 230,000 employees and is listed on the New York Stock Exchange and Hong Kong Stock Exchange.

Despite the staggering wealth and power of China Mobile, it has received repeated criticism over its charges. Critics have claimed that half of its profits came from cynical fees for services that are free in many countries, where market competition and democratic government would have banned them.

With her delicate features, short hair and red lipstick, Li Xiaolin could be any other Chinese housewife.

But Xiaolin is in fact one of the most powerful women in China.

Xiaolin comes from the Li Family, a dynasty that ‘controls all electric power interests’, according to U.S. diplomatic cables.

Her hardline father Li Peng has stepped down as boss of China Power International Development, but the company is run by Xiaolin and her brother Xiaopeng, a vice governor of Shanxi province.

The pair ‘exercise tremendous power and influence in China’s electric power industry’. Both are tipper to rise prominently within the regime.

As security minister for the Politburo, Yongkang is tasked with the protection of the state  – a broad job that few westerners actually know what it involves.

Yongkang may be coming to the end of his term in office, but his power and influence still stretches far and wide.

Yongkang was boss of the China National Petroleum Corporation, and is understood to have made 14 visits to Sudan in trips that are likely to have been centred around oil production.

According to a diplomatic cable released by Wikileaks, ‘Yongkang and his associates controlled the oil interests’ of China.

The turbo-charged expansion of China’s economy has rested on a cheap supply of oil, and that’s largely down to Yongkan’s oil deals.

One of China's youngest mandarins, Shulin began his rise to power as boss of Sinopec (China Petroleum & Chemical Corporation Limited ), the top-ranking company in the Fortune Global 500.

The chemicals firm is a subsidiary of the state-owned Sinopec Group.

Within China its path to power has been smoothed by the communist party.

But in the rest of the world Sinopec has been heavily criticised for an appalling record of environmental damage. Primatology professor Christophe Boesch criticised Sinopec’s use of dynamite in Gabon in 2004, noting that it might drive native Gorillas deeper into the jungle, where they would be outside legal restrictions on hunting.

Shulin has since left Sinopec and is regarded affectionately by state media.

He has recently been given a role as a provincial governor and is thought of as being among the ‘sixth generation’ of national leaders.

A banker who is still regarded as a young newcomer, largely due to the powerful shadow cast by his father.

Yuan is the son of Chen Yuan, one of the powerful figures who urged the brutal suppression of protests in Tiananmen Square in 1989.

The treatment of students at the protests sparked a global outcry, as still leaves a stain a on China’s appalling human rights record.

Residents were protesting at economic reforms being implemented to transform China into a ‘socialist market economy’, the catalyst for the country’s rise to economic power.

In a sign of just how removed from Western values China is, Yuan Senior was lauded within the country for his role in the brutal treatment of citizens.

Worryingly, his son is set to regain influence when vice-president Xi Jinping succeeds Hu Jintao as the nation’s leader.

Gang is one of the young generation of officials making their rise to power through China’s institutions.

He is currently chairman of the board of directors of Bank of China Limited and Bank of China (Hong Kong) Limited. Gang is even more powerful than the bank’s president – a sign of his ambition and power.

Gang also has control over a limited number of foreign investments in the bank. Coming from the People’s Bank of China, his business philosophy is centered on the strength of the state and he is unlikely to lead open the country up to foreign competition and scrutiny as some critics would like.

Gang’s rise to prominence at such a young age suggests that he is destined for one of the coveted positions within the system.

One of the few Chinese mandarins to have received an education in England.

Shuqing went from a hardline Marxism-Lenninism faculty to Oxford University.

Upon returning to China, he began his career at the central bank, became a governor of a province and was then given a prominent position at the State Administration of Foreign Exchange.

In a career that mirrors those of many other Chinese star mandarins, Shuqing was eventually given a position in a commercial lender, where he was sure to keep state influence over foreign investors.

Shuqing is currently China’s top security regulator, though few people outside of the small elite know what the intimidating role involves.

Yanfeng ensured his popularity among ordinary Chinese people by saying that every family should own a car.

But that’s not a surprising statement to come from someone who led one of China’s older carmakers, First Automobile Works, as Yanfeng did.

The grandson of renowned meteorologist Chu Coching, Yanfeng began his career in engineering.

He is the current president of China FAW Group Corporation, and in a sign that he is being primed for a top job within the regime, has been made a provincial vice-governor.

The Chinese economic expansion has been fueled by better transport, and a large part of that is down to Yanfen’s drive for profits.

Guoqing is one of China’s ‘masters of war’.

He is now one of the most powerful figures within China’s military-industrial complex, supplying arms around the world.

Norinco has ran into controversy with the west. Its ammunition was blocked during the Clinton Administration in 1993 after concerns about their use by criminals in inner cities. Employees were put under investigation in 1994 by the CIA.

In August 2003, the Bush Administration imposed sanctions on Norinco for allegedly selling missile-related goods to Iran.

There have also been controversies around  a transport system to Pakistan and links with arms sales to Colonel Gaddafi in Libya. 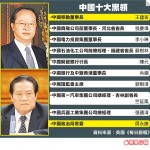 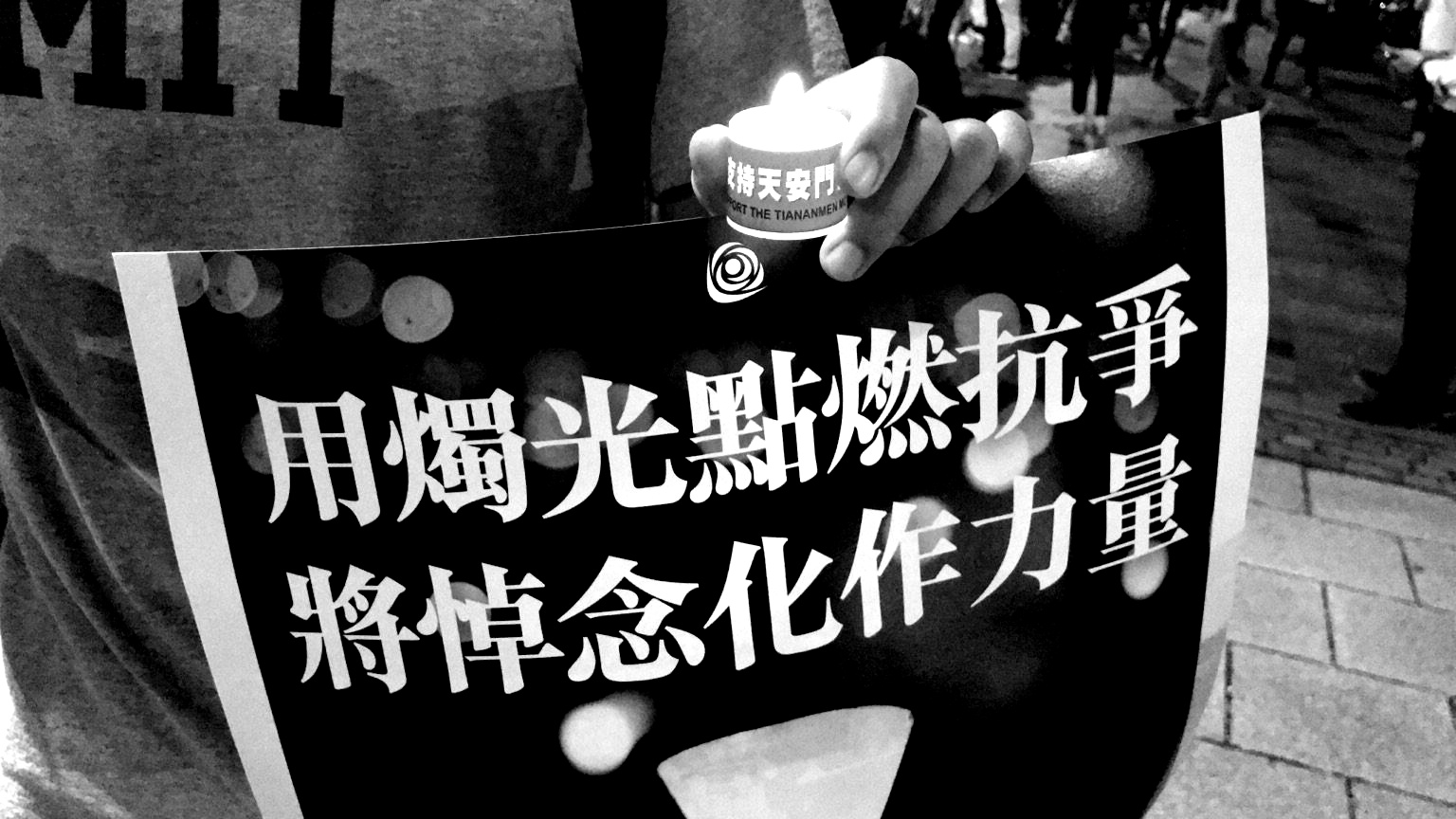