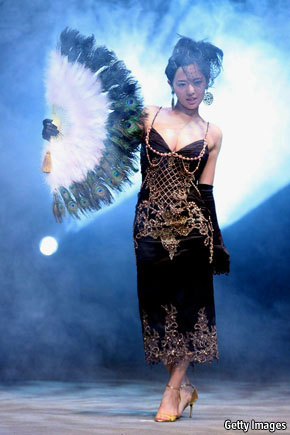 This odd slogan underlines the mixed and often contradictory feelings Chinese people can have about Japan. Brought up to hate it for its historic crimes, they also admire it for being better at some things than China: electronic goods; social order; comic books—and pornographic videos. Ms Aoi, unlike her government, has done nothing to hurt the feelings of the Chinese people, or at least the young men among them. She has more than 13m followers on Sina Weibo, a Chinese microblog, and her public appearances have caused near-riots with a rare pro-Japanese slant.

Hers was not the only cause that hitched its wagon to the demonstrations. Some took part for the chance of letting off steam without feeling the sharp end of the police’s anger. Some waved portraits of Chairman Mao, who in fact was rather insouciant about these inalienable specks of Chinese sovereignty. Most stayed away altogether. Han Han, a writer, racing driver and one of China’s most popular bloggers, called for looters and vandals to be punished.

Ms Aoi’s appeal received some sympathetic comments among the 150,000 or so that it attracted. But many of her fans, like the nation as a whole, were fully behind the protests. Some taunted her with obscene insults and threats. One comment, translated by ChinaSMACK, a website, sought to make the best of things, suggesting that, when it takes back the Diaoyu islands, China should capture Ms Aoi alive.