编辑以“When Tibet Loved China”为题介绍了这15张照片，不过学者Dibyesh Anand在脸书上对这个标题有异议：“inappropriate headline but amazing/painful/interesting pictures of Chinese occupied Tibet during Cultural Revolution”，“As we know, the headline is not totally incorrect because a number of Tibetans did get caught in the mad excitement of cultural revolution.” 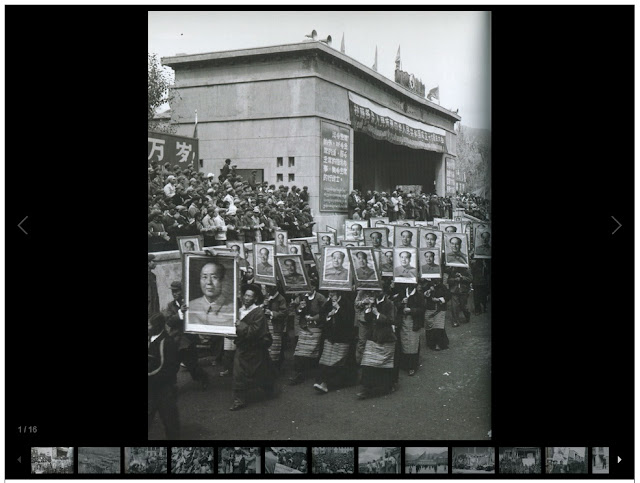 In the wake of the Great Leap Forward, a failed crop-production campaign that led to the death of tens of millions of people between 1958 and 1961, Chairman Mao Zedong retreated, and spent the next five years licking his wounds and plotting revenge against the cadres who had criticized his policies. When he returned to the national stage in 1966, it was to launch the decade-long Cultural Revolution, in which he managed to convince the whole nation to replace right and wrong with pro- and anti-Mao (some things that were anti-Mao: tradition, religion, elders). The campaign convulsed the entire nation, from Beijing to Shanghai and even to the Tibetan capital of Lhasa, conquered (or, as Beijing says, “liberated”) in 1950.

The Tibetan writer and novelist Tsering Woeser was born into this madness in 1966; her father, Tsering Dorjee, was an officer in China’s People’s Liberation Army and something of an amateur photographer. As Tibetans — like the rest of their countrymen — burned old books, tortured their religious leaders, and attacked (and sometimes murdered) their parents, Woeser’s father was there to witness it.
After her father died, Woeser published the photos in Taiwan in 2006, in a book titled Forbidden Memory: Tibet During the Cultural Revolution. In his introduction to the book, Wang Lixiong, Woeser’s husband and a prominent writer and scholar, notes: “In the face of the world, the Cultural Revolution is an embarrassment for the Communist Party; and Tibet is also an embarrassment, so the Cultural Revolution in Tibet has become doubly taboo.”

Today, Tibet is once again in flames, literally: nearly 100 Tibetans have self-immolated since 2009, protesting against Chinese rule. This installment ofFP‘s Once Upon a Time series shows the Land of Snows from a long-forgotten period, when Tibet’s enemy wasn’t China, but itself. 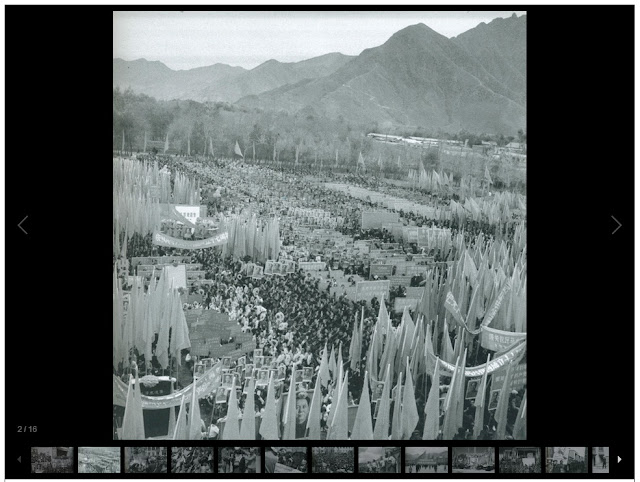 The Cultural Revolution swept up most of the people in Tibet in its endless marches, campaigns, and struggles. This 1966 photo shows more than 50,000 people celebrating the 17th anniversary of the founding of the People’s Republic of China in Lhasa. 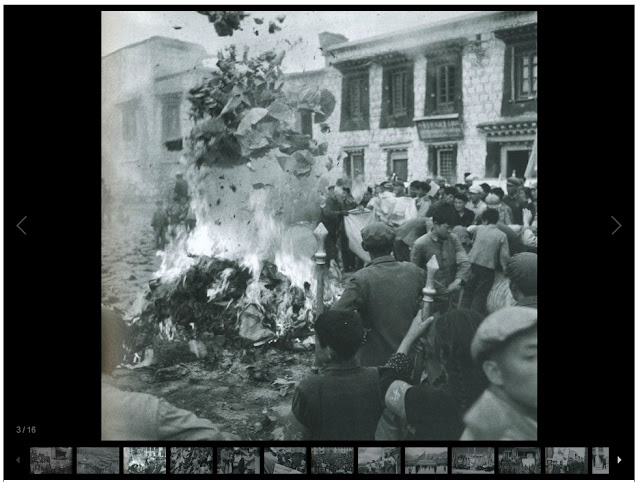 Tibetans burn Buddhist holy scriptures. It’s unclear, says Woeser, who are the fire-starters and who are the onlookers. 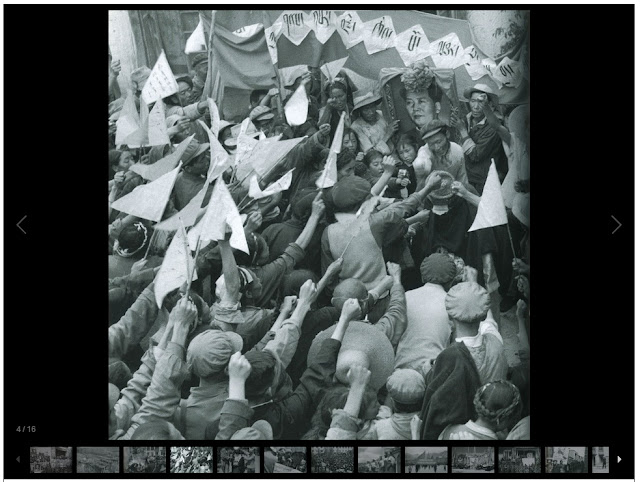 “Struggle sessions” featured a crowd criticizing an individual for behavior that was seen as going against Mao or his teachings. In this photo, Tibetans denounce 26-year-old Samding Dorje Pakmo, at that time Tibet’s most famous female living Buddha, in her courtyard. 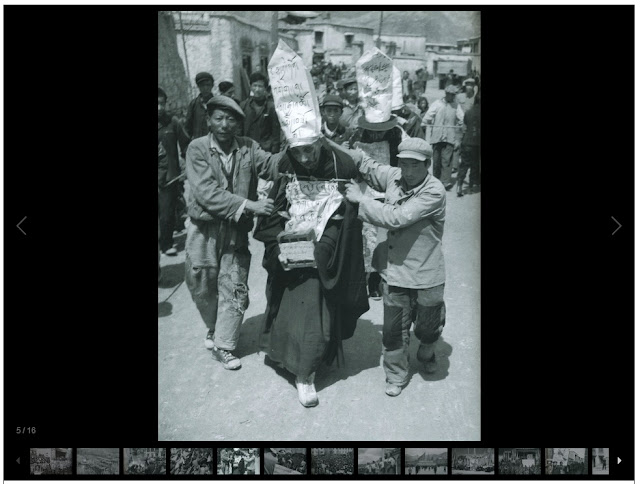 Men drag the monk Rempu Rimpoche through the streets of Lhasa. After the Cultural Revolution ended in 1976, Rempu fled to India. In 2006, Woeser confirmed that the then-80-year-old monk was still alive, and living in New York. 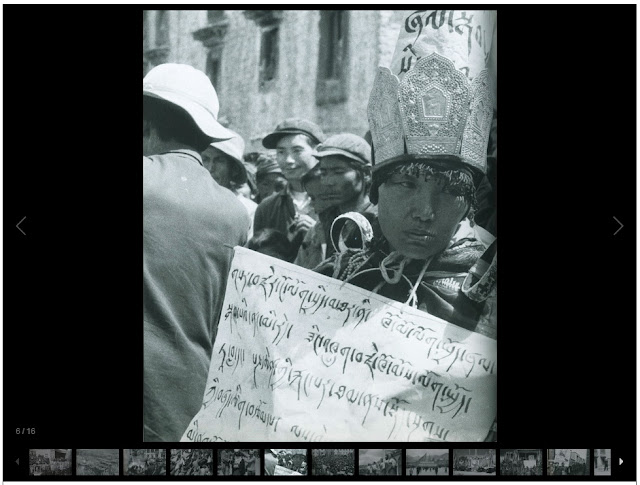 There are still some people who remember this woman, writes Woeser. She came from a family of wealth and power, but gave it all up to become a nun. The poster, written in Tibetan, accuses her of being a “counter-revolutionary.” 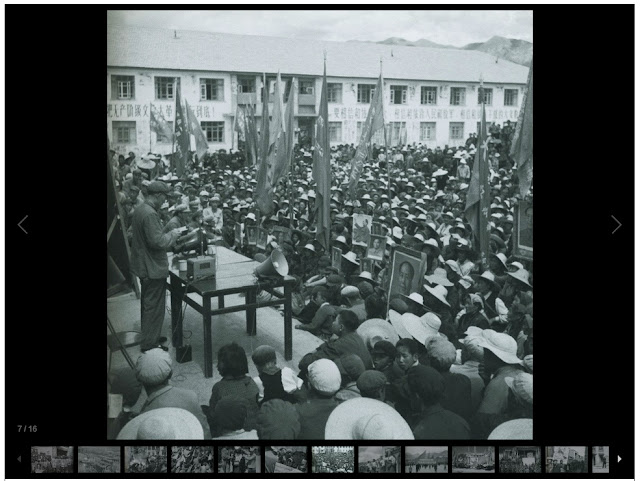 Mass meetings extolling Mao and the virtues of the Cultural Revolution took place nearly every day. 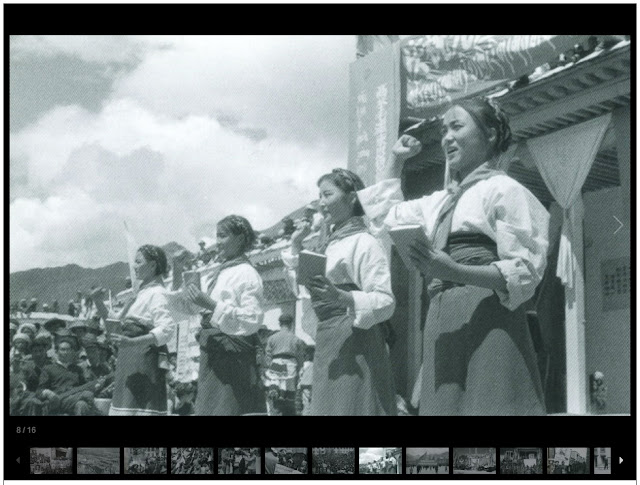 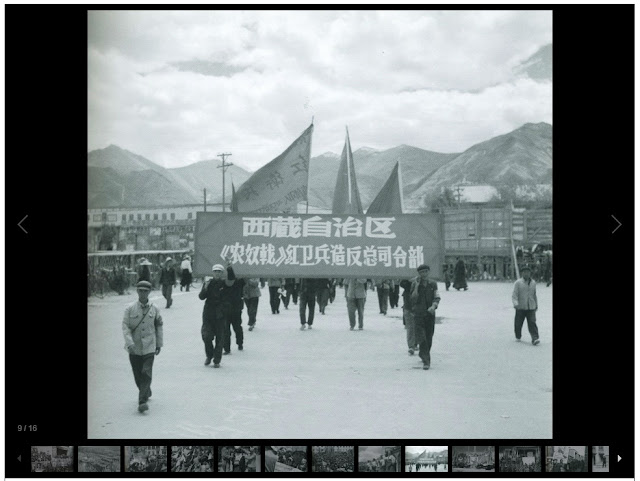 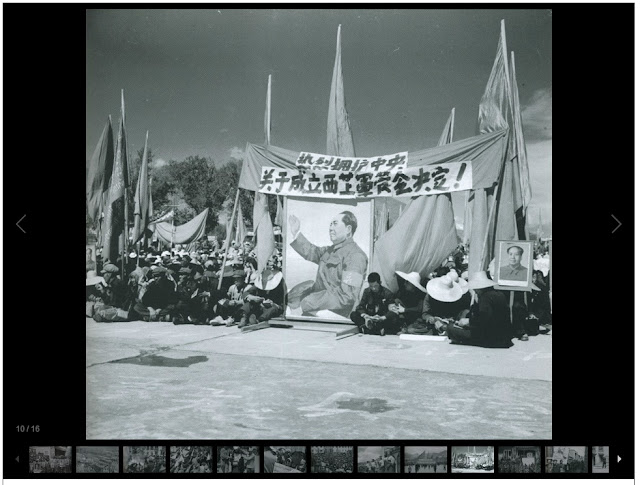 The sign reads: “Warmly support the center’s decision regarding the creation of a military control commission in Tibet.” (Tibet is spelled incorrectly.) 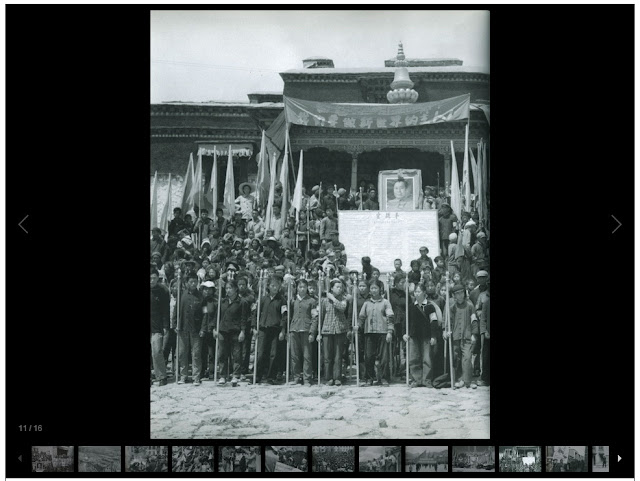 This photo, the cover of the book, shows children standing under a sign in front of a temple that reads, “We want to be the masters of a new world.” 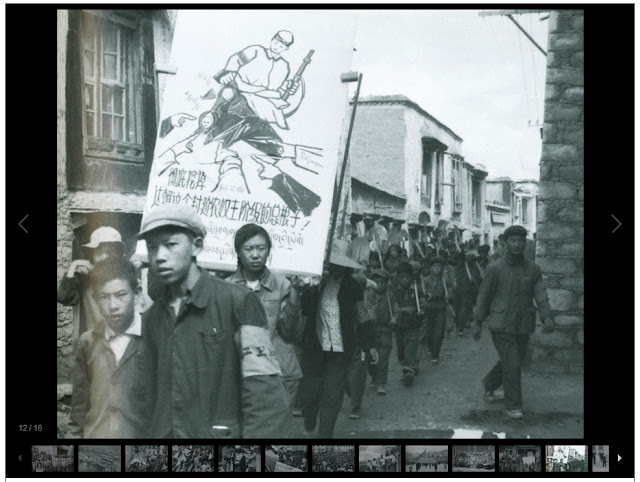 Woeser doesn’t know who painted the sign, or what kind of work the young children carrying shovels were being sent to do. The sign reads: “Firmly cut out the Dalai [Lama], the main source of this fedualistic, serf-owning class!” 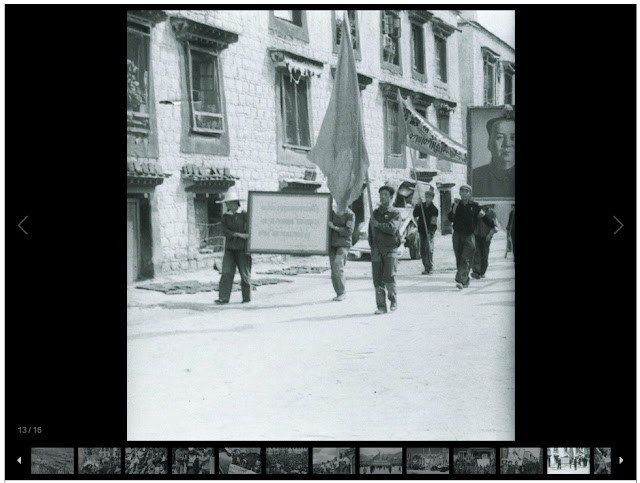 In this photo, Red Guards carry slogans, one of which says in Tibetan: “Turn every store, every residential community, into a garrison for propagating Mao Zedong thought!” 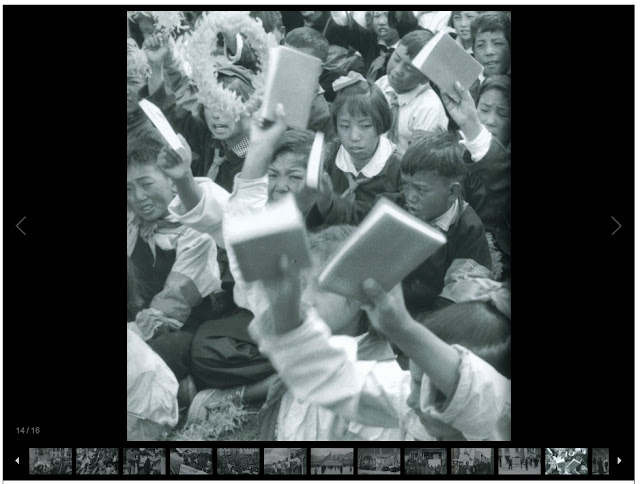 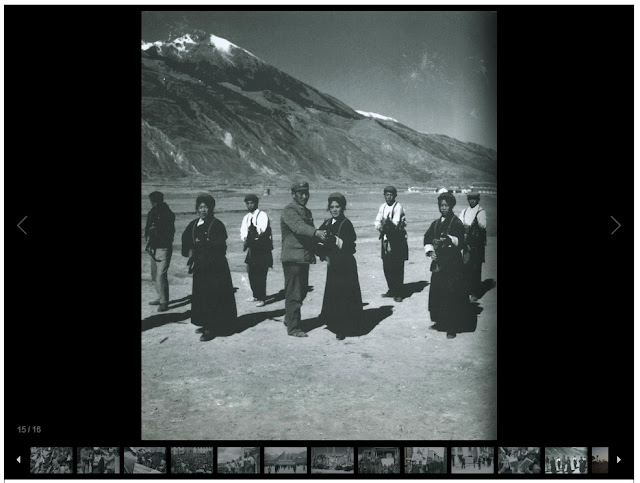 Gun practice, under the mountains. 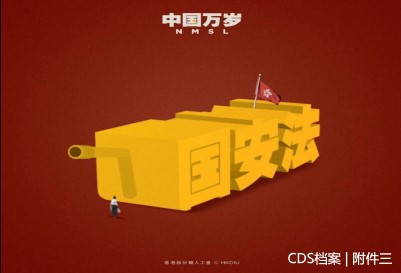