唯色 | Paul Mooney: Immolations in Tibet: The Shame of the World 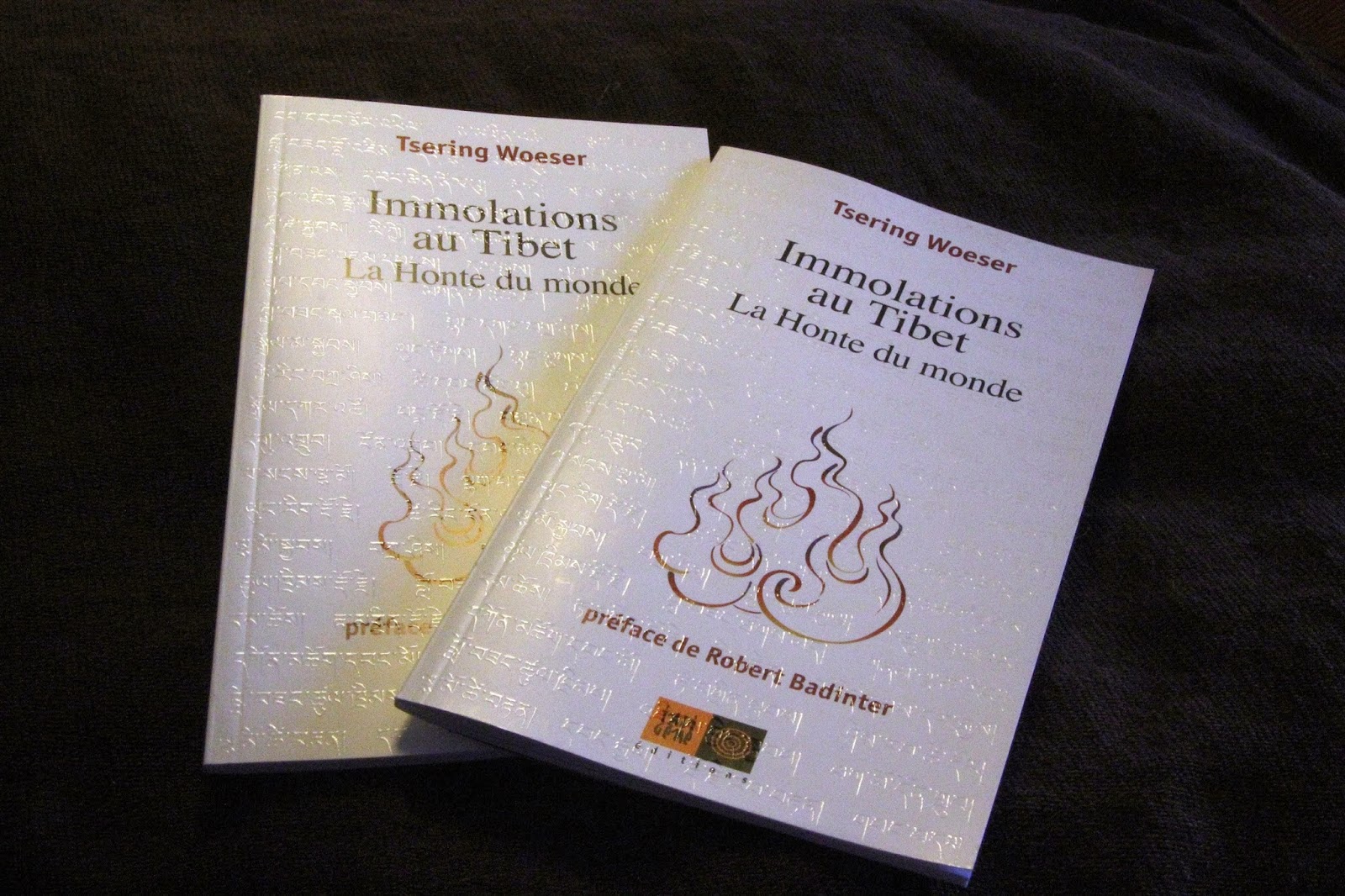 Immolations in Tibet: The Shame of the World

In February 2009, Tapey, a young Tibetan monk in the Kirti Monastery in Ngaba upset because prayer ceremonies were canceled at his monastery, doused himself in gas, walked to an intersection and set himself on fire while holding a home-made Tibetan flag with a photo of the Dalai Lama on it. People’s Armed Police standing nearby opened fire and shot the monk, and then took him away. He survived, but his whereabouts remain unknown.

Tsering Woeser, a prominent Tibetan poet and commentator, reported the incident in her blog. Over the next four years, she would record a total of 126 incidents of Tibetans setting themselves on fire to express their dissatisfaction with Chinese rule—one more incident occurred following publication.

In her latest book, Immolations au Tibet, La Honte du Monde, or Immolations in Tibet: The Shame of the World, Woeser describes in detail the background to this sad trend.

This slim book, running just 40,000 French words (English and Chinese versions will follow), was written between April and June of this year. Woeser provides statistics, the reasons for the self-immolations, and final testimonies, and she explains China’s attempts to spin this phenomenon in a way that does not reflect badly on the government’s rule of Tibet.

The topic is highly sensitive and the Chinese have made a huge effort to suppress discussion of it. Woeser says hat National Security agents warned her not to write any books about this topic, a threat she bravely ignored.

She is angered that the Chinese media portrays the self-immolators as criminals, alcoholics, gamblers, mentally ill, prostitutes or those manipulated by the “Dalai Lama clique”, a disparaging term the government uses to describe Tibet’s spiritual leader.

Woeser says that Tibetans consider self-immolators heroes, placing their photos respectfully in their homes and monasteries and writing songs in praise of them.

The incidents cut across all sectors of Tibetan society. Of the 125 cases recorded by Woeser, 104 people died as a result of setting fire to themselves. There was one case in 2009, 14 in 2011, 86 in 2012 and 25 so far this year—one more incident occurred after publication. The oldest person was 64, the youngest 16, with an average age of 26. There were 106 men and 18 women, including 21 fathers and 10 mothers. There were 42 religious people, including three rinpoches, or incarnate lamas, as well as 63 herders, three laborers, a carpenter, blogger, tanka artist, taxi driver, forestry worker and a former Communist Party cadre. Two were middle school female students, three were male students.

One of the most compelling parts of this book is the analysis of the 46 final testimonies that Woeser has collected, which gives a clear picture of the motives. The testimonies, some of which run just a few words, include hand-written notes, recordings, and verbal statements told to friends and relatives.

According to bystanders who witnessed people setting fire to themselves, some 50 shouted political slogans as they burned, including, “Allow His Holiness the Dalai Lama to return to Tibet,” “Tibet will be free,” and Tibetan independence.”

The Chinese government has accused the Dalai Lama of instigating the suicide attempts in an attempt to separate Tibet from China.

Woeser counters that the self-immolations are the result of a sharp increase in suppression of Tibetan religious and political freedoms that has not been seen in years. She points to human monitors embedded in monasteries, forced “patriotic education,” monks forced to publicly denounce the Dalai Lama or face expulsion from monasteries and possible arrest, and nomads pushed off of their grassland homes, ostensibly to save the deteriorating environment. She says monasteries have been forced to fly Chinese national flags and to hang photos of Communist Party officials, while house-to-house searches are carried out to confiscate photographs of the well-respected Tibetan spiritual leader.

The demure-looking Woeser, who is frequently followed by security agents when she’s in Lhasa, the Tibetan capital, and who is sometimes placed under house arrest in her home in Beijing, describes “Orwellian” means of monitoring and controlling the daily lives of Tibetans.

Communist officials criticize the self-immolations as a contradiction of Buddhist beliefs (forgetting that China openly applauded the self-immolation of a monk in Vietnam 1963 as a sign of opposition to American involvement in the country).

Woeser says she was once careful in speaking about the trend for fear of being criticized for encouraging it. But she says the rise in the number of incidents has forced her to speak out more forcibly.

She emphasizes the non-violent nature of self-immolations and that none of the final testimonies made any mention of harming other people, a point highlighted by the cover of the book.

After the French publisher Indigene asked Woeser to write this book, she asked the well-known and outspoken artist Ai Weiwei to design the cover, which has soft orange flames with the names of the self-immolators inlaid on a white background. She says that the stylistic flames are non-violent and not something that would frighten people. Woeser likens the cover to a khata, or ceremonial Tibetan scarf, and says it’s a tribute to the Tibetans who have sacrificed their lives.

She says that the Chinese government has refused to reflect on the reasons behind the self-immolations, instead intensifying its brutal policies.

And she throws the responsibility back at the government by quoting Mao Zedong, who once said: “Where there is oppression, there is resistance.”

“People must understand that self-immolation is a form of protest,” she writes, “and that as long as the cause is not removed, the protests will continue.”

She says that the brutal police and military clampdown against protests has left people without any outlet to express their feelings, and that this has forced them to channel their anger into a more drastic form.

“With such harsh oppression, and all means to protesting suppressed,” she told me over the phone from Lhasa, “the strongest alternative brave Tibetans have is self-immolation.”

Woeser describes how the police have targeted the friends and relatives of the self-immolators, with some given prison sentences, and at least one sentenced to life imprisonment. Other’s have been punished for smuggling news of these incidents outside of China.

She says people who commit self-immolation rarely do so to arouse international sympathy, but rather to awaken Tibetan people and to put pressure on the Chinese leadership to change it’s policies. But she laments the inaction of the international community. She points to the case of Thích Quảng Đức, a Vietnamese Buddhist monk who burned himself to death on a busy Saigon street in 1963, resulting in a huge international backlash against the anti-Buddhist policies of the South Vietnamese government.

“The incidents have risen from a small number to more than 120, but the world still remains silent,” she said. “This silence makes people feel disappointed.”

Woeser quotes from Elie Wiesel’s Nobel Peace Prize speech of 1986 about another time and place where people suffered while the world looked away:

“Can this be true? This is the twentieth century, not the Middle Ages. Who would allow such crimes to be committed? How could the world remain silent?”

She attributes the lack of concern to the world economic downturn, the grim nature of the phenomenon, and  the growing economic influence of China, that makes the self-immolations an unpleasant truth.

“Many countries have their own vested interests, and so they cave in when it comes to human rights,” she says.

She says that only when there is pressure from international society will the Chinese oppression of the Tibetan people end.