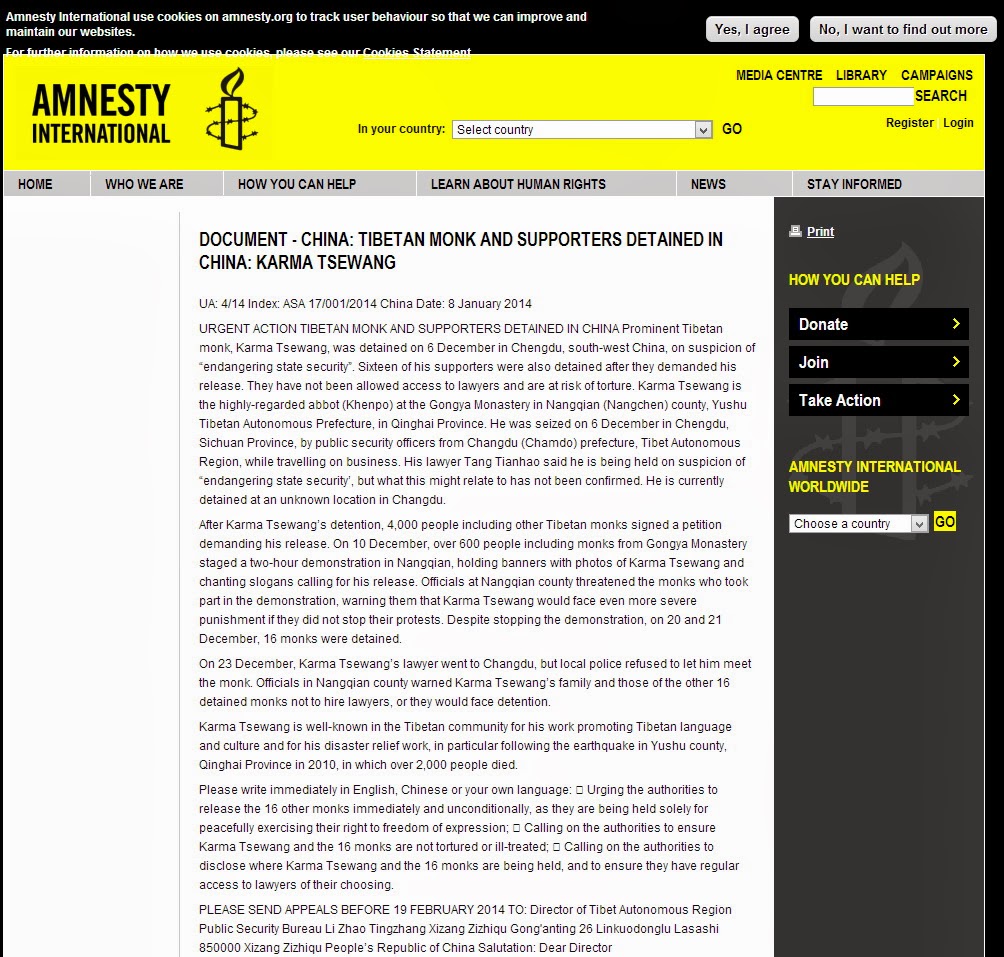 URGENT ACTION TIBETAN MONK AND SUPPORTERS DETAINED IN CHINA Prominent Tibetan monk, Karma Tsewang, was detained on 6 December in Chengdu, south-west China, on suspicion of “endangering state security”. Sixteen of his supporters were also detained after they demanded his release. They have not been allowed access to lawyers and are at risk of torture. Karma Tsewang is the highly-regarded abbot (Khenpo) at the Gongya Monastery in Nangqian (Nangchen) county, Yushu Tibetan Autonomous Prefecture, in Qinghai Province. He was seized on 6 December in Chengdu, Sichuan Province, by public security officers from Changdu (Chamdo) prefecture, Tibet Autonomous Region, while travelling on business. His lawyer Tang Tianhao said he is being held on suspicion of “endangering state security’, but what this might relate to has not been confirmed. He is currently detained at an unknown location in Changdu.

Officials at Nangqian county threatened the monks who took part in the demonstration, warning them that Karma Tsewang would face even more severe punishment if they did not stop their protests. Despite stopping the demonstration, on 20 and 21 December, 16 monks were detained.

On 23 December, Karma Tsewang’s lawyer went to Changdu, but local police refused to let him meet the monk. Officials in Nangqian county warned Karma Tsewang’s family and those of the other 16 detained monks not to hire lawyers, or they would face detention.

Karma Tsewang is well-known in the Tibetan community for his work promoting Tibetan language and culture and for his disaster relief work, in particular following the earthquake in Yushu county, Qinghai Province in 2010, in which over 2,000 people died.

Since the Tibetan mass protests of 2008 against Chinese rule, the Chinese government has stepped up repression in Tibetan areas and imposed intrusive military and security controls on the local people. The authorities also continue to subject Tibetans to humiliating “patriotic education”, which forces them to denounce the Dalai Lama and express support for the Chinese Communist Party.

Tibetan monks have been a primary target of the crackdown. According to the International Campaign for Tibet, as of 19 December 2013, 125 Tibetans have self-immolated since 27 February 2009 in protest against this crackdown.