Difference between revisions of "All of this is only the beginning!" 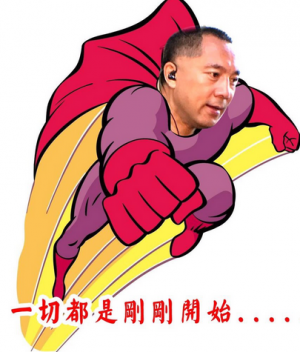 All of this is only the beginning! (Source unknown)

This phrase, regularly used in 2017 by exiled billionaire Guo Wengui (郭文贵) on Twitter and in his daily personal video updates, were echoed by Chinese netizens in Weibo comments and shared in graphic memes. This is one of several Guo catchphrases to appear on Weibo amid authorities' efforts to control the narrative surrounding the sensitive tycoon, also including:

Based in the U.S. since 2013, Guo Wengui in March 2017 levied allegations suggesting that the official corruption targeted by Xi Jinping’s anti-graft campaign is more serious and pervasive than previously known, implicating high-ranking CCP officials such as Wang Qishan, Meng Jianzhu, and Fu Zhenghua. Guo’s allegations—for which he claimed to have evidence that will be unveiled in an upcoming “global news conference”—would validate theories that Xi’s anti-corruption campaign is actually a means for the president to level his political opponents.

The allegations from Guo—who is known to have connections to the Ministry of State Security—unsurprisingly irked the CCP leadership. Beijing responded by waging a media war against the billionaire, successfully lobbying for Interpol to release a “red notice” for his arrest, and issuing repeated censorship directives forbidding unsanctioned commentary on Guo. The appearance of Guo's catchphrases on Weibo proved his words continued to receive intense attention among Chinese-speaking social media users, both on Western platforms and on their censored counterparts within the Great Firewall.

As Guo’s battle with Beijing was heating up, the politically-connected tycoon began posting daily video updates on Youtube on May 3, and sharing them on Twitter where he had a substantial and growing number of Chinese followers. In addition to sharing his daily videos, he has also used his Twitter account to flaunt his wealth, showing off his private jets, yachts, and lavish properties; and sharing his exercise photos to urge his followers to work out.