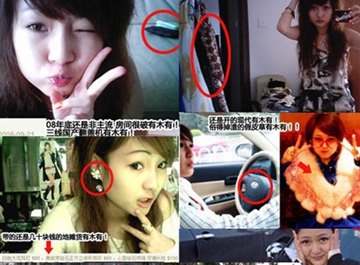 “Anti-corruption warrior princess” is the sarcastic title given to Guo Meiling and Liu Xingyu.

Both women claimed to work for charities while at the same time flaunting their considerable wealth online. Outrage over their lifestyles of conspicuous consumption served as a rallying cry against corruption.

Guo Meiling in particular was the cause of considerable controversy because she claimed to work for the Red Cross Society of China, and was later proven to be the mistress of a top charity official. The phenomenon of mistresses in China receiving expensive gifts and well-paying jobs has directed public anger towards the mistresses and their sugar daddies, who are often government officials.