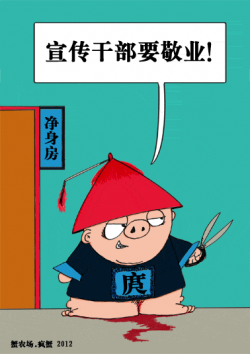 “The propaganda cadres will respect my work!” (Hexie Farm)

To be censored or castrated. Tuo comes from the surname of Tuo Zhen, the propaganda chief of Guangdong since May 2012.

Journalists and editors at Southern Weekly protested in January 2013 when Tuo bowdlerized the liberal Guangdong journal’s new year’s greeting, turning a call for constitutionalism into a banal piece of propaganda. Protesters called for Tuo’s resignation, revealing that over 1,034 Southern Weekly articles had been slashed under his watch. The journal eventually negotiated a truce, but later turned its back on some protesters. Meanwhile, Tuo remains in office.

During the protests, Tuo became synonymous with deletion, censorship, and even castration. One netizen explains the “etymology” of Tuo in a weibo:

Shuowen Jiezi: 庹, pronounced “tuo.” Originally a device used for castration. During the time of Wei Zhongxian, new palace eunuchs underwent the procedure in the imperial capital’s castration room. When the surgeon’s knife came down, most patients would cry out, “Tuo,” meaning that the cut was done neatly and is complete (妥 tuǒ). “Tuo” was later used to generally refer to castration: pigs, dogs, and other farm animals were all said to be tuoed. Today, “tuo” also means “delete.” ex. Has your Weibo [account] been tuoed?