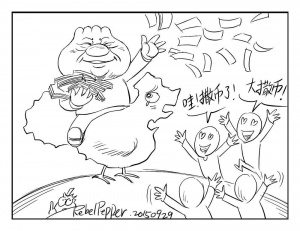 Bitter jokes about the president's free spending on countries other than the one he runs started in October 2015, when Xi and British Prime Minister David Cameron agreed on "up to £40bn" in trade and other deals during Xi's visit to the U.K. Despite being the world's second biggest economy and incredible poverty reduction over the last 30 years, China is also among countries with the great income disparity. Netizens are resentful of Chinese investment abroad when so many still struggle at home.