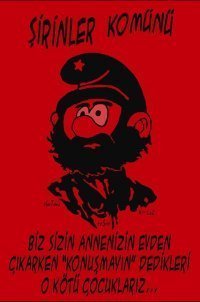 Brainy Smurf, the only smurf who seems discontent with the communitarian life of the smurfs (and the only smurf to wear glasses), is said to represent Trotsky.jpg who was exiled by Stalin for criticizing the Communist regime.
Retrieved from "http://chinadigitaltimes.net/space/index.php?title=Blue_Daddy&oldid=421"