Difference between revisions of "Brickspert" 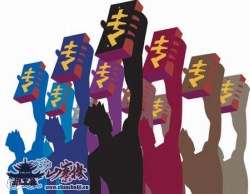 The Chinese people have become increasingly suspicious of so-called experts to whom they refer pejoratively as “bricksperts.” Brickspert is the word “expert” (专家) with the first character replaced by its homophone meaning “brick.”

This cynicism towards experts is caused by people's perceptions that experts are controlled by government or corporate interests and do not give their expertise impartially. In the political context, people often see experts used by the government to play down health risks (as in the milk scandal) or to justify difficult economic conditions (such as the housing market).

A person labeled as a "brickspert" tells the fox character to not complain about high housing prices because this is "completely normal." He accuses people of only knowing how to complain, to which the fox character replies, "What else can we do besides complaining and throwing bricks?" Notice that the brickspert is sitting on a building floating on a literal housing bubble.
Retrieved from "http://chinadigitaltimes.net/space/index.php?title=Brickspert&oldid=5891"
Category: