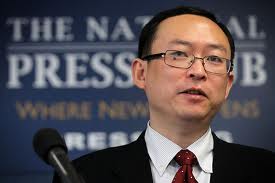 Yu Jie was told he could be “buried alive” after Liu Xiaobo won the Nobel Prize in 2010.