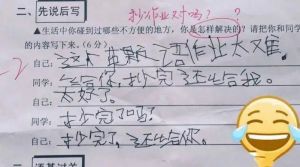 It was not long before netizens redirected their derision abroad, ridiculing other nations that failed to follow China's lead. State media picked up the homework analogy, too, such as a February 25 Beijing Daily story titled "Multinational Call to Copy China's Homework: Three Trends Welcomed by the Situation" (多国喊话向中国抄作业，形势迎来3个新变化). The third trend listed in the article: that "WHO experts have confirmed that China's efforts have succeeded." Wrapped into the "copying homework" analogy is the idea of China's superiority as a pupil whose work ought to be copied. As journalist Chang Ping commented at Deutsche Welle Chinese on March 6 (translated by China Change):

...I can hardly celebrate the way many are doing across the strictly controlled social media environment, because the fact remains that there were nevertheless 119 people confirmed infected, 143 suspected of having the virus, and 38 people who succumbed to it. It’s difficult for me to accept this jubilation. More incredible is how the propaganda these days is patting China on the back for supposedly being the “class star” [in fighting the epidemic]. It beckons foreign countries to learn from China’s example like slow-witted students copying “homework” from the bright ones, ridiculing foreigners for “not even knowing how to copy our work.” [Source]

A New Weekly opinion piece put it this way: "As the 'Copy Homework Party' would say, 'I'm letting you copy me for your own good. It's your fault if you don't, and might hurt me, too.'" Reflecting that in the beginning it was certain provinces within China being told to copy the homework of others, @hannah0905 writes, "To look at China as a single entity, as the straight-A student whose response to the epidemic should be emulated by other countries, is to forget the pain before the scar has healed. It is 'absentminded.'"