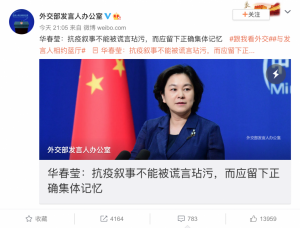 Sharing the "correct collective memory" of China's response to COVID-19 with the world (Source: Weibo)

The record of history approved (or created) by the Chinese party-state. On June 8, 2020, Foreign Ministry Spokesperson Hua Chunying was questioned in her regular press briefing about a recent State Council Information Office white paper that provided a glowing account of Beijing’s coronavirus response that also defended against criticism of its opacity and misinformation. Hua replied, "China issued the white paper not to defend itself, but to keep a record. The history of the combat against the pandemic should not be tainted by lies and misleading information; it should be recorded with the correct collective memory of all mankind." The official Ministry of Foreign Affairs Weibo account also shared her answer. Netizens have questioned the meaning of "correct collective memory," recalling Beijing's track record of lies and misinformation, which MOFA sometimes spreads to the world: