Difference between revisions of "Destruction experiment" 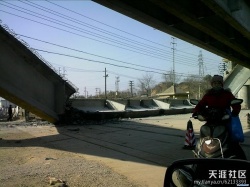 On December 5, 2011, the steel beam for a viaduct being constructed in Hefei collapsed, injuring several workers.

On December 5, 2011, a beam of a viaduct under construction collapsed injuring a number of workers in Hefei, Anhui province. At a press conference after the accident, Jiang Hao, project leader of the Hefei Key Project and Management Board, stated that the incident was part of a pre-arranged “destruction experiment”: "We still have to construct the frame and pour concrete below. In order to ensure the quality and safety of the concrete, we have to test first, collecting relevant technical parameters. Without the experiment, it will be very confusing."

Two workers who were reinforcing bolts on the bridge at the time of the accident said that they were unaware of the “experiment.”

For more information on the incident, see coverage from Want China Times.