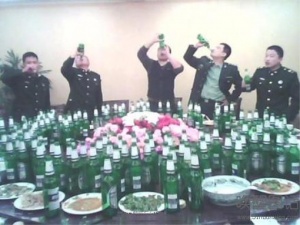 Chinese Communist Party officials have become notorious for their propensity to excess. In 2013, the Xinhua-affiliated magazine Ban Yue Tan reported on the problem, interviewing a mayor of a city in the center of the country who said he wined and dined four to five times a day, or more than 1500 times in a year. Calling the CCP the Dinner Party alludes to gluttonous corruption while simultaneously throwing censors off the trail of sensitive discussion online.

Xi Jinping's anti-corruption campaign is targeting bribery and luxurious spending by government officials. The years-long effort often appears to be more about Xi consolidating his power than about fighting corruption, however. Calls for officials to publicly disclose their assets have been squelched by the government.