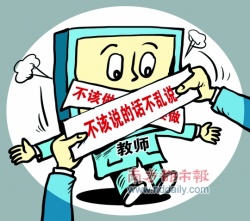 A teacher is being gagged with banners reading, “Refrain from doing things that are not to be done,” and “Refrain from remarking on things which ought not to be remarked upon.”

On August 10, 2010, the education bureau of Pizhou City, Jiangxi Province issued an official document to all secondary and private schools. After stating that three Pizhou teachers had been detained in the past for spreading rumors online, it instructed all teachers to “pay attention to their images, be mindful of politics, speak about the big picture, refrain from doing things that are not to be done, and from irresponsibly remarking on things which ought not be remarked upon.”

Campaigns against online rumors have become common in China, and in the summer of 2013 central authorities launched a massive anti-rumor campaign—complete with a legal interpretation sanctioning prison time and fines for digital rumor-mongers—in which many influential microbloggers were targeted.