Difference between revisions of "Donkey people" 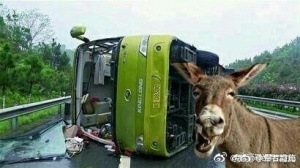 This term originated after the 2016-2017 Shandong “dishonored mother murder case” (辱母杀人案件). In April 2016, Yu Huan (于欢), a 23-year-old resident of Liaocheng, Shandong, was arrested for attacking a group of loan sharks with a knife, killing one. The standoff came after Yu’s mother Su Yinxia (苏银霞) failed to keep up with usurious interest payments on a loan of over 1 million yuan, having already paid off the principle. The loan sharks reportedly restrained and abused the two in the reception lobby of Su’s workplace, with the group’s leader Du Zhihao (杜志浩) exposing his genitals and suggesting the mother resort to prostitution if unable to pay. A passerby reportedly saw the scene through the window and notified public security officials, who came to the scene but quickly departed. After they left, Yu grabbed a kitchen knife and injured four of the captors, including Du Zhihao. Du drove himself to the hospital, but died before receiving treatment. 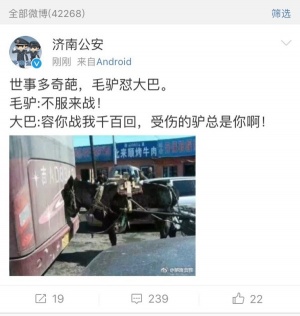 JiushiFenlan（@就是芬兰）: Aha, so you originally thought of us as the diao people, but now realize we are actually the donkey people.

BingxueFeiHan (@冰雪非寒): Originally I mistook us all for netizens, and after realized we were actually fart people. Now I discover that actually we’re not fart people, we’re donkey people. Heartfelt thanks to the Jinan Public Security Bureau for telling us the truth.