Difference between revisions of "Drop-and-run" 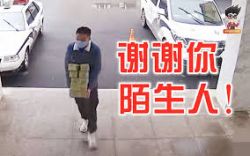 Soon after the novel coronavirus outbreak hit Wuhan, netizens noticed news reports popping up that all followed a certain formula, touting ordinary people who "dropped donations of money/items at XX police station, then ran off." They all took place in similar locations—Public Security offices, police stations, or government agencies (as opposed to charities)—and they all unfolded in the same way—someone left a donation, then hurried away (without giving their name). When money was left, the amount was often the same (10,000 yuan). Some "drop-and-runs" happened several times in the same location. The donations mostly ended up going to the Red Cross and other official organizations.

There is no definite proof that these reports are part of an official effort to spread "positive energy" in a barrage of flimsy fabrications. It is possible that the good will in these stories, and the method of spreading it, are genuine. But what, then, has the government done to deserve it? If, on the other hand, these stories have been produced to meet some official goal, why prey upon the people's emotions?