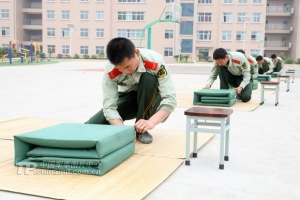 In August 2015, a Weibo user living in North Korea assured his followers that he is ready to serve his country: