Difference between revisions of "Free from turmoil" 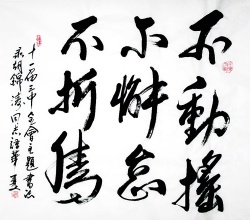 One of Hu Jintao’s signature phrases speaking to his efforts promoting harmony and social stability, which included the suppression of opinions not consistent with the government line.This phrase originates from a northeastern dialect of Mandarin and was made popular by Hu Jintao in a January 2009 speech:

On January 3, 2009, a Guangzhou TV show host commented on Hu’s speech [Chinese], saying the government should leave ordinary people “free from turmoil.” He was sacked the next day.

On Weibo, one netizen criticized Hu Jintao for only knowing how to be free of turmoil:

傻哥气得笑哭了1: Why do I hate “Hu Wen?” Let's start with “Hu.” If you don’t have a diamond drill then don’t do the porcelain work. Why don’t you resign if you don’t have what it takes to do the job? Since you refuse to resign, then “do what you are supposed to do in the position that you are in!” You only know how to be “free from turmoil.” Isn’t this holding on a post without doing the work and not letting anyone else take over? As the top official, are you only going to get the credit but not take responsibility? Now let’s talk about “Wen.” Your entire family became rich over night since you came to power. Yet, you are not ashamed of saying that you have “never acted in your personal interest!” When you hurt decent people, you say “that’s clearly impossible!” Typical scumbags! (August 1, 2014)