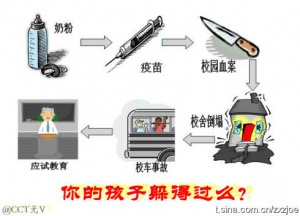 The story resurfaced in 2010 when veteran journalist Wang Keqin [zh] filed an in depth investigative report on the case for the China Economic Times. After his report was published, Wang was told his life may be in danger if he returned to Shanxi. The term has since been used to taunt officials, as in “Minister Wu, don’t forget to get your daughter immunized!”