Difference between revisions of "Govern-rot" 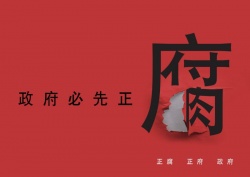 Tearing the “rot” out of “government.” (Wang Jing and Xie Hui)

Homophonous with “government” (政府), but the characters can mean “totally rotten” or “completely corrupt.” Blocked from Weibo search results as of September 10, 2014.

麦穗佛: May I ask, those huge sums of money that govern-rot officials collect for dog registration fees, where do they get used?! (September 4, 2014）