The term grass-mud horse, which sounds nearly the same in Chinese as “f*** your mother” (cáo nǐ mā), was originally created as a way to get around, and also poke fun at, government censorship of vulgar content. After netizens created an online video depicting the grass-mud horse at war with and eventually defeating the river crab, a homonym for "harmony," a propaganda catchword, the idea caught fire and the video became a viral hit. Netizens continually expanded the lore of the grass-mud horse by creating catchy songs and fake nature documentaries on YouTube and other video sharing sites.

The phrase is especially meaningful on a political level because the Communist Party is often described as "the mother" of the people--thus the phrase, "f*** your mother" can also suggest "f** the Party." The grass-mud horse is one of many mythical creatures created by netizens in response to increasingly strict censorship measures.

The term has since developed an additional meaning: one who is a “grass-mud horse” is someone who is web-savvy and critical of government attempts at censorship. As one Chinese blogger explained, "“Grass Mud Horse (草泥马)” represents information and opinions that cannot be accepted by the mainstream discourse, and “the Song of the Grass Mud Horse” has become a metaphor of the power struggle over Internet expression."

For more on the grass-mud horse, see China Digital Times. 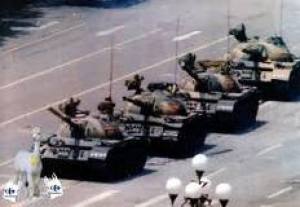 The grass-mud horse, originally just thinly veiled profanity, has become a potent political symbol. Here a grass-mud horse is shown in place of "tank man," who stood before the tanks as they rolled into Tiananmen Square.]]

An example of how "mythical creatures" such as the grass-mud horse, which were originally thinly veiled profanities, have become potent political symbols. Here a grass-mud horse is shown in place of "tank man," who stood before the tanks as they rolled into Tiananmen Square.