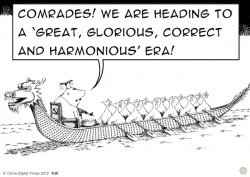 The Chinese Communist Party has described itself as “great, glorious and correct” (伟大光荣正确 wěidà guāngróng zhèngquè) for decades. Netizens have turned this term on its head, using it to sarcastically refer to the Party’s stubborn insistence that it is always in the right. For example: