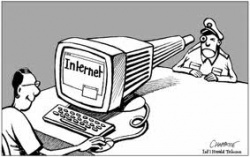 Over the years, as it became apparent that the Internet was a space in which people could freely exchange ideas, the Chinese government asked several software companies, including Nortel, Cisco, and Sun Microsystems, to build a virtual “wall.” The result was the Golden Shield Project, known to most Chinese netizens as the Great Firewall of China.

In addition to censoring content deemed sensitive, the Great Firewall blocks entire websites, including YouTube, Twitter, and Facebook, that have been or could be used by activists and dissidents to connect, spread information, and organize protests.

As a result, Chinese-based companies such as Youku, Sina Weibo, and RenRen have grown in the space left by those blocked websites, providing similar services, but with harsher censorship measures and surveillance. The landscape of the Chinese Internet has therefore become much like a LAN, with China’s netizens restricted for the most part to China-based, government-regulated websites and barred from many international platforms.