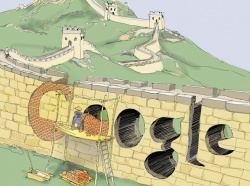 The “Great Firewall of China,” or GFW, is the nickname Chinese netizens have given to the Chinese government's system for blocking certain online content from view in mainland China. A firewall is any mechanism which controls Internet traffic. Like its namesake, the Great Wall, the Great Firewall was built to keep unwanted foreign influences out of China. The result is a balkanized Internet within China, known as the Chinternet or Great Chinese LAN.

Chinese netizens who wish to access blocked content can attempt to scale the wall, using software to mask their IP addresses and thus circumvent the censorship. However, authorities continue to adjust and upgrade the Great Firewall, which results in a game of cat-and-mouse between censors and netizens.

The “Father of the Great Firewall,” Fang Binxing, is one of China’s most reviled Internet personalities. Fang openly admitted to using six virtual private networks (VPNs) to bypass the censorship apparatus that he himself engineered.