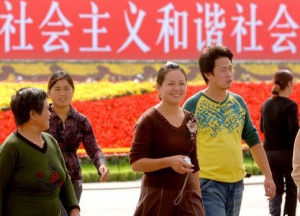 Euphemistic attribute of material censored on the Chinese internet, derived from the quality in society sought by the Hu Jintao-Wen Jiabao administration (2002-2012).

Each administration of Chinese leaders has adopted a motto to embody its governing philosophy and socioeconomic ideology. Originally a Confucian concept, the idea of "social harmony" was resurrected as a key tenet of former CCP General Secretary and PRC President Hu Jintao's "scientific development concept." The Hu administration introduced its doctrine of "harmonious society" (héxié shèhuì 和谐社会) in 2006, shifting the Party's focus from economic growth to ameliorating income inequality and other threats to social stability.

Critics of this philosophy argue that the government had created a surface appearance of harmony by suppressing or "harmonizing" elements of society that are not to the Party's liking. As online communication and mobile phone use spread under Hu's reigning doctrine, "harmony" became a euphemism for censorship. Censored content is often said to have been "harmonized" (bèi héxié 被和谐).