Difference between revisions of "He Weifang" 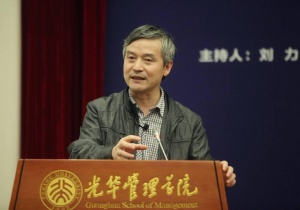 He Weifang has argued that the Chinese Communist Party is "an unregistered and therefore illegal organization." (Source: szhgh.com)

He Weifang is a legal scholar and popular blogger who advocates for the rule of law and constitutionalism. He has been on faculty at Peking University (PKU) since 1992, though he was sent to a Xinjiang branch campus for two years after signing Charter 08 and serving as one of Liu Xiaobo's lawyers.

He launched to prominence as a legal reformist and a public intellectual in 1998, when he published an op-ed in the Southern Weekly criticizing the assignment of decommissioned army servicemen with no legal training as court judges. He's article stirred up so much controversy among the general readership, and such a backlash in military publications, that Southern Weekly issued an apology. Later on, however, the government changed its policy, requiring former servicemen to pass the national law exam before working in the courts.

He faced reprisals for signing Charter 08, Liu Xiaobo's democratic manifesto modeled after Czech dissidents' Charter 77. He and Mo Shaoping, Liu's lawyers, were barred from a November 2010 flight to the U.K. on the grounds that their trip posed "a threat to China's national security." More than a year earlier, He resigned from PKU and accepted an offer to join the law faculty at Zhejiang University. But Zhejiang later rescinded the offer without explanation. He returned to PKU, which then dispatched him to Shihezi University in Xinjiang. Scholar Richard McGregor called it a "deliberately humiliating transfer." He returned to Beijing in 2011.

Undeterred by his temporary exile, He has continued to speak out against violations of the law and the constitution. In 2011 he wrote an open letter criticizing then-Chongqing Secretary Bo Xilai's "strike black" campaign. In 2013, He signed an open letter calling on the National People's Congress to ratify the International Covenant on Civil and Political Rights. And in 2016, He publicly criticized the powerful Communist Youth League and questioned its status as a publicly funded organization.

While pushing for political and legal reform, He also writes about the law and a variety of social and cultural phenomena. In 2010 He co-authored a well-received collection of social commentary, "Si shou lian tan" (四手联弹), with scholar and memoirist Zhang Yihe. He closed his Weibo account in 2013 during a government crackdown on Big Vs, the most popular users of Weibo, when he had over a million followers. He has since reopened his account and more than regained his followers.

He was named one of Southern Metropolis Weekly's 20 most influential internet personalities in 2008, as well as one of Foreign Policy's 100 Global Thinkers in 2011. His book "In the Name of Justice: Striving for the Rule of Law in China" is available in English.